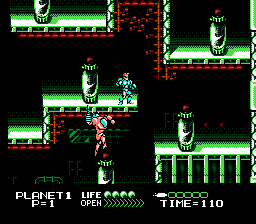 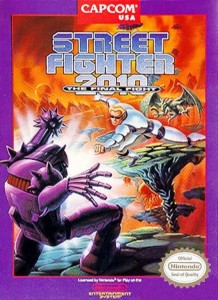 My seven-year-old self knew better: this wasn’t Street Fighter. 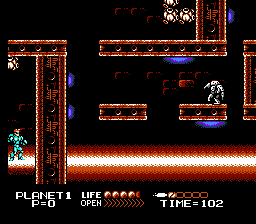 Street Fighter 2010: The Final Fight has nothing to do with either of those storied Capcom franchises. It could have been called Robo Generica for all of its relationship to Street Fighter. The former is a more apt title, but it wouldn’t have done the game any favors from either critical or sales standpoints. Believe it or not, the first Street Fighter actually performed decently in the States (2010 was released one year prior to Street Fighter II), thus linking 2010 –a difficult sci-fi action title that would be hard to sell on its own merits – with Street Fighter was a way to boost sales, if only initially. Nobody was fooled, and the game was forced to sell on its own merits anyway. Street Fighter II came out a year later, and Capcom never bothered with an alternate Street Fighter timeline again.
Yes, Street Fighter 2010‘s name taints it slightly, but this shouldn’t be the case. It’s a distinct action/brawler that implements unique ideas into a relatively stale genre. You play as “Ken,” a flexible cyborg cop who can shoot lasers out of his four limbs. Most levels are like boss stages, in that, you focus your firepower on one large enemy. Once the enemy is destroyed, you collect his life force and jump quickly into a portal; failure to jump in the portal before your time runs out results in death. Interspersed between these boss battles are more traditional platforming stages and stages that have you fighting a few enemies, but the goal is always to collect enough enemy life force to open a portal.

Is that you, Big Daddy?
Make no mistake, Street Fighter 2010 is Capcom-brand tough. Ken doesn’t always control with the grace and elegance that a flexible robot should. Yes, he can hang from ceilings, and grasp onto walls and poles, but he can’t shoot diagonally very well. Since most of the enemies attack diagonally, it can be cumbersome trying to align Ken’s line of sight with his target. The level design too is curiously complex. Most of the “boss” stages take place in one large room, but the rooms have no set design pattern. Poles, crates, and random sci-fi crap is strewn about through each room. This is probably so the player will utilize Ken’s flexible movements more frequently and not just stand and shoot the boss. Regardless, most levels are visually disorienting, a feature you never want in a game. Lastly, Ken has several hit points, but they don’t refill at the end of each stage. The game is divided up into several stages per area, and only after you beat the entire area does his life refill. Yes, you can find some energy along the way, but the bosses are pretty dad blame difficult. A bone, Capcom. That’s all we, as players, ask for.
Thanks to its jarring stop-and-go level structure and complex controls, Street Fighter 2010 has an odd, engaging feel, unlike any action game you’ll play on the NES. If you can withstand some punishing difficulty (even by Capcom standards) and overlook its silly moniker, it will surprise you, even as you’re cursing its name.
B-
The following two tabs change content below.