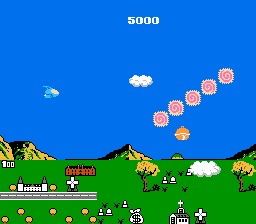 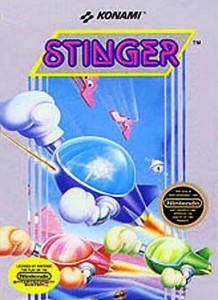 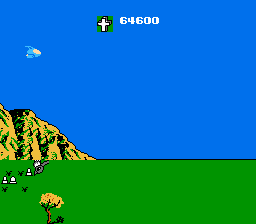 Yup, that’s a cross. In an American Nintendo game.

Stinger‘s proper Christian name is Moero TwinBee: Cinnamon-hakase wo Sukue! For those of us who don’t speak Japanese, that’s Burn TwinBee: Rescue Dr. Cinnamon, the second game in Konami’s revered TwinBee franchise. Until my preparations for this review, I was unaware that America had received any TwinBee game. Konami, for whatever reason, seems hellbent on keeping the majority of its awesome shmups (Parodius, most of the Gradius series, TwinBee) out of the U.S. Stinger isn’t my favorite 8-bit entry in the series (that would be the original), but any TwinBee is better than none.
TwinBee is distinguished from other shmups by its light-hearted atmosphere, overuse of pastels, and unique weapon upgrade system. Guide the TwinBee through a series of vertically scrolling stages, destroying anything and everything within firing distance. You have a traditional laser weapon for the flying folk, and a ground bomb for the stationary folk. As you shoot the clouds, floating bells will appear. Shoot the bells to make them change colors, but don’t let them pass you by. Collecting colored bells will modify your ship, either through weapon upgrades or shields; a blue bell speeds you up, white bell give you an additional shot, etc. The more you shoot the bells, the greater the eventual upgrade (blue flashing bells are the best).
Stinger‘s gameplay is no different, although it does tweak the formula some. Konami adds horizontally scrolling stages amidst the traditional vertically scrolling stages that characterize the series, and the results are mixed. The horizontal stages – stages 1, 3, and 7 respectively – aren’t poorly designed, but they feel less like TwinBee and more like simplified Gradius stages with TwinBee elements. Stinger‘s only the second game in the series, so it’s natural Konami would experiment. Still, it’s telling that, after Stinger, Konami never put horizontal stages in a TwinBee game again.
O TwinBee! How I lament your absence in America! Though you are but a simple, ordinary shmup, your formula is classic and brilliant. ‘Tis nothing but a shame that Stinger is the only watered-down TwinBee representation we shall ever see. I bid Konami come to their senses and release a Stateside compilation, that all Westerners might taste of the series’ goodness.
B-
The following two tabs change content below.