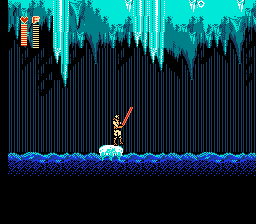 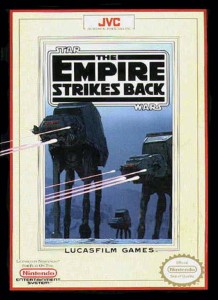 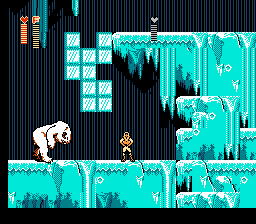 Hall and Oates, ladies and gentlemen.

If Star Wars for the NES was a Bantha poodoo sandwich, then The Empire Strikes Back is a Wampa fur coat. Both are disgusting, in their own distinct ways, but the Wampa coat has a purpose – keeping one warm – while the Bantha poodoo sandwich is just a poodoo sandwich. Wonky analogies aside, Empire Strikes Back succeeds in being a playable platformer, something Star Wars couldn’t achieve. All your favorite environments from the movie are accounted for, like Hoth, Dagobah (not a Day goes Bah?), Darth Vader’s ship. Unlike Star Wars where you switched between Leia, Han, and Luke, you’ll only be playing Luke here. Thankfully, he’s far more powerful in Empire. His life bar takes a bit longer to decrease, he collects Force powers (special moves), and his lightsaber slices and dices accordingly. The majority of the stages are straightforward (albeit difficult) left-to-right platforming, but not all of them. Every “Star Wars” game based on “The Empire Strikes Back” is required by Lucas Law to have a level where you destroy a legion of walkers on Hoth, and Empire is no different. Luke doesn’t control that well, the enemies can overwhelm you at times, and you only have one life and six continues (you’ll need all of them, and probably more). Empire is rough around the edges, but at least it feels like you’re playing a “Star Wars” game.
C
The following two tabs change content below.