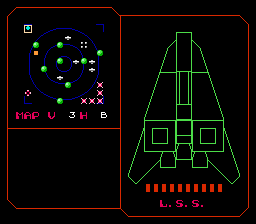 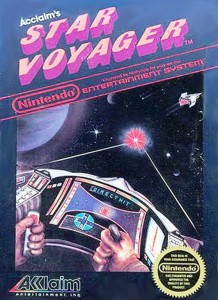 Almost… out of… QUARTERS!!!

Have fun with that.

In place of a game with actual gameplay, Star Voyager presents needless complexity and little else. All of the tasks it requires of you – view a map, warp around the map, destroy enemies, refuel – are simple concepts. Star Voyager declares them as challenges. Unless you have the manual or the FAQ right in front of your person, you won’t know what to do. You will not understand what the shapes on the map represent. You will not understand what your objective is. You might figure out how to warp on your own, but if you don’t know where you’re supposed to go or what you’re supposed to do, it does little good.
Let’s say you have a manual or FAQ and Star Voyager becomes (slightly) more clear. On the map there are asteroid belts, planets, space stations, enemies, black holes, a Cosmostation, and an orange block which represents you. The goal is to create a warp path on the map with your orange block (avoid the black holes and asteroids), warp to the enemies, then blow them apart. Once you warp to where the enemies are on the map, you will likely not find any. Star Voyager wants the enemies to approach you, not the other way around. So what can you do in the meantime? Warp over to two of the planets (it’s up to you to figure out which two) and find the HyperDrive Engine and the Super Laser. Once you find these, float around in space and wait for the enemies to attack you. You’ve literally exhausted all there is to do.
Your reward for figuring out Star Voyager‘s purpose is nothing. Once you know how to read the map and warp and fight enemies, you’ll realize that the game is a mirage, an innocuous action title that shrouds its oversimplicity with obscure mechanics.
F
The following two tabs change content below.