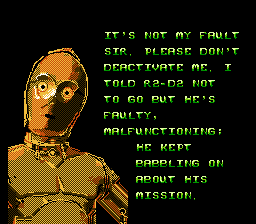 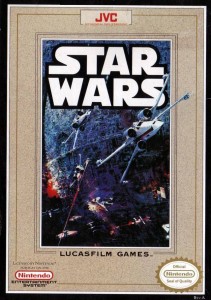 Well, at least the cover’s cool. 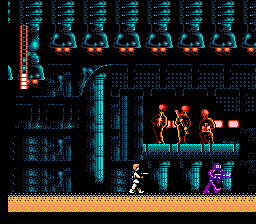 Those aliens aren’t enjoying themselves as much as they pretend to.

If I were the Retro Gaming Judge, sentencing grumpy edicts from on high, I’d hold Star Wars in permanent contempt for besmirching the mostly reputable (in 1991, anyway) sci-fi franchise. Its crimes are numerous and belligerent: 1) Short cave exploration sequences, complete with creatures who attack you while you’re jumping, wide gaps that are easy to fall through, and generic level design. 2) Luke’s initial blaster weapon is, and I quote from the court records, “piss-poor.” It takes several hits to kill any enemy, ranging from a rat to Greedo. Some enemies seemingly can not be killed at all, no matter how long you pump them “full of red.” 3) If you are shot by an enemy, your standard length life-bar will decrease by four points. If you touch an enemy, your life goes down by half. 4) Once you acquire Han Solo into your party, you can never let him die. Otherwise, you’ll have to travel back to the cantina and wade through a mess of Greedos and bizarre cantina remix music (that sounds suspiciously like Mega Man) just to pick him up again. 5) If you touch Boba Fett or his clones, he becomes a spewing mess of bullets, much like any shmup end-boss. I’m not sure there’s any way to kill him. After many deaths, I stopped caring. Leia, the Death Star, and I’d imagine, unprecedented amounts of rage await players who soldier forth through Star Wars. Much like “Attack of the Clones,” the Star Wars Christmas Special, and Jar Jar Binks, it’s not worth it.
F
The following two tabs change content below.