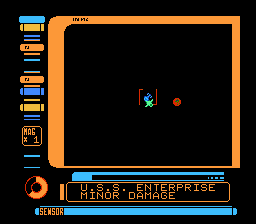 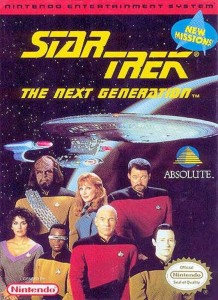 The Old Missions disappeared into the Neutral Zone and were never spoken of again. 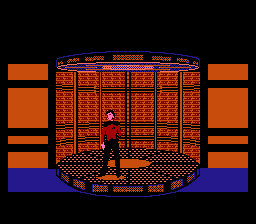 “Don’t you recognize me? It’s your boy, Wesley!”

Let’s get this out of the way: Picard. By a wide margin. And not just Picard. Worf, Data, Riker, heck, even Troi, Crusher. The original cast of “Star Trek” may be iconic, but the “Next Generation” cast feels like family. That being said, neither series inspired great games. Star Trek: The Next Generation improves upon Star Trek: 25th Anniversary by limiting the majority of the gameplay to the cockpit. Imagineering seemed to know that they couldn’t make an expansive “Next Generation” game on the NES, so they kept the scenarios in space. A smart move, but the cockpit has its limits.  One doesn’t wish for the planet-exploring snoozefest that was 25thAnniversary, but a wider variety of missions would help the game immensely. Not even Patrick Stewart’s stern, lovable visage can save Next Generation from mediocrity. 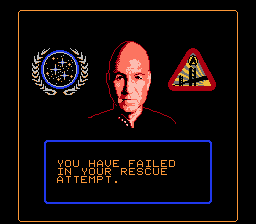 What I’m hearing is, I’m too fat!
You begin the game as a new recruit, fresh from Starfleet. Picard starts you off with one of several randomly generated missions. Once you complete it, you rank up to Ensign, and from then on, it’s all missions, all the time. The more missions you complete successfully, the higher you will rank. The higher your rank, the less time you’ll have to complete your missions, and the more difficult they will be.
On the main cockpit screen, you can speak with Worf, Data, La Forge, O’Brien, and Riker. Riker’s a figurehead, good for telling you your task and nothing more. O’Brien is in charge of the transporter. You’ll often need to transport people or goods off of planets, and you’ll use O’Brien to do this. La Forge is in charge of the power and the engines. Select him to play a mini-game that will boost your engines, weapons, etc. Data is your go-to guy for just about everything: use him to warp to the sixteen planets, set the ship into orbit around said planets, and steer the ship towards the destination. Worf will turn your shields and weapons off and on, but don’t push him around. Klingons are testy, you know.
There are several types of missions you’ll encounter in Next Generation: delivery (taking cargo or a diplomat to a planet), pick-up (like delivery, but the opposite), evacuation (rescuing people or cargo from planets or ships via an Atari-like mini-game), and damaging ships. In all of these mission types, you’ll usually arrive at your destination, sidle up close to the planet, destroy a couple ships, orbit the planet, pick up or drop off the delivery via transporter, and wait to see Picard’s smiling face. The order of these tasks will rotate, depending on the mission, but these are the tasks you’ll be accomplishing in ninety-five percent of the missions. It’s entertaining at first, especially after you learn the initially dodgy controls. The Enterprise feels completely at your command, and it’s amusing to interact with the TNG regulars. After a dozen missions or more of similar gameplay, though, you’ll grow weary of picking up and dropping off diplomats at Rigel III. Even the battles, initially a welcome break from delivery runs, grow tiresome. Enter into Pilot Mode by pressing select on the Cockpit screen, make sure your shields and weapons are turned on via Worf, track their limited movements and destroy. Nothin’ to it.

Oh, the sights you’ll see.
Once you’ve ranked up to a Captain and performed a ceremonial Klingon dance in the comfort of your living room, there’s no reason to return to Next Generation. The randomly-generated mission output is a unique and interesting concept, especially for the NES, but they will start to repeat sooner than they should. Should you stick with the game, a class-5 tedium cloud will eventually engulf you in a peanut brittle-like substance. ‘Least that’s what Q said…
C
The following two tabs change content below.