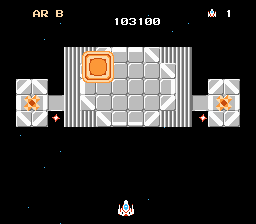 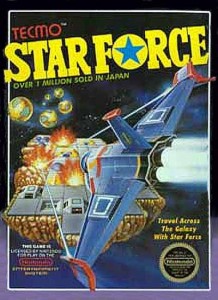 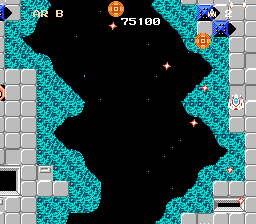 Is this the end of STAR FORCE?!

Star Force is like a tumbler of bad whiskey all at once: overwhelming, brutal, and potentially incapacitating. Control a white space fighter amidst a backdrop of poorly constructed space stations, and reign bullet death upon your enemies. The enemies’ movements and their speed distinguish Star Force. Each series of enemies (they attack in groups of ten or so) has their own pattern, whether it’s spiraling downwards, haphazardly zig-zagging in all directions, or flying in a straight line. As the enemies move, they spew scores of bullets. You have two options: be a daredevil and attack the entire group to get points (putting yourself at great risk); or play it safe, shoot what you can, and fly past the remnant. There is only one power-up, an occasionally appearing add-on that gives you twice the firepower. With it, holding down ‘A’ ensures a steady stream of bullets, leaving you to focus on maneuvering; get it whenever you can. The oppression of the groups of enemies weighs you down from the beginning and never lets up. Only the ludicrously easy bosses (named after the Greek letters of the alphabet to distinguish them) break up the non-stop shooting.
Before today, I had only played the Famicom version of Star Force on my grandparents’ bootleg 42-in-1 cartridge from Thailand (previously mentioned here). The gameplay is the same between the two versions, but the difficulty is not. Unlike most games with Japanese origins, the NES Star Force is much more difficult than the original Famicom version. The enemies and their bullets come at you faster, while your ship’s response time is slower. The Famicom version didn’t skimp on the difficulty either, but it felt reasonable and progressive. This strange difficulty shift turns one of my favorite 8-bit shooters into a solid, but deeply flawed title. It’s playable, sure, but when you’ve had aged Irish whiskey, why bother with the bottom shelf?
B-
The following two tabs change content below.