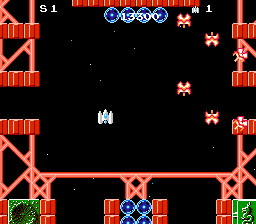 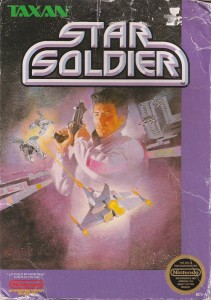 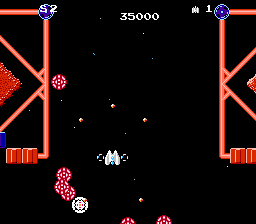 Star Soldier is the first in a series of largely unknown shoot-em-ups by Hudson Soft, and though it’s not labeled as such, a spiritual sequel to Hudson Soft’s previous shooter Star Force. Both are vertical shmups where you control a space fighter against clusters of enemies with distinct movement patterns, but the similarities end there. If Star Force (in its original Japanese form) was a triumph of minimalist design – unobtrusive backgrounds, one power-up, clean level layouts – Star Soldier is a bombastic production that aggravates more than it entertains. From the first level, the backdrop – a sort-of space construction site that takes up the entire screen – overwhelms your view. Enemies and their projectiles blend in with the background colors, resulting in deaths-a-go-go. Sometimes your ship will fly underneath pieces of the construction area, which allows you to avoid enemy fire. But it will also stop you from shooting at any enemies in front of you. Also, this movement is random and you never know when it will occur. It’s a needless feature that does more harm than good. There are three power-ups available, ranging from a quicker fire, to firing in both directions, to an all-encompassing stream of bullets pouring out of your ship. You’d think the latter would make you unstoppable, but unless the enemies are coming at you diagonally, it doesn’t do much of anything. This is in fact the problem with power-ups in Star Soldier: they look cool, but they don’t deliver on the promise of powering you up. Like any Hollywood blockbuster, Star Soldier has its enjoyable moments, but at its core, it’s pure flash, no substance.
C+
The following two tabs change content below.