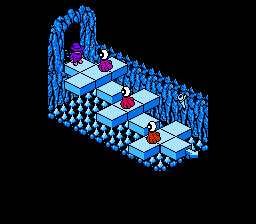 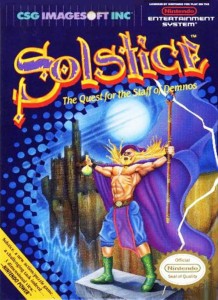 But… you already have a staff.

That crazy staff of Demnos! Always getting lost, it is! In Solstice, you’ll need to track down six pieces of the staff amidst 250 rooms of puzzles, trolls, blocks, and potions. Don’t let the number ‘250’ scare you, though: you don’t have to search all the rooms to beat the game, nor should you since most of them hold nothing of value. As you explore, keep an eye on your map via the pause screen, though be aware the map will not highlight any items, blocks, or unsolved puzzles.
Puzzles in Solstice are often obtuse, unless you understand a technique called block-jumping. Block-jumping involves absorbing a block into your wizard robe by pressing ‘B’, then press ‘A’ + ‘B’ at the same time to release the block and jump off of it to get a boost. This move will propel you to previously unreachable locations, and you’ll be able to jump across beds of spikes and enemies. Potions are also an essential part of puzzle-solving, though your quantities are limited. Blue potions give you invulnerability, yellow freezes enemies, blocks, and elevators, green reveals hidden blocks within a room, and purple will destroy any enemies with a room. Later rooms require lots of experimentation, which is a fancy word for saying ‘many deaths until you figure out what you’re doing.’ While Solstice gives you five or six lives to gamble with, you have to discover continues and extra lives throughout the rooms if you want to take down the game in one playthrough (and you’ll have to eventually, as there’s no save feature – b’oh!). Solstice doles out pleasure and pain in equal measures, which is to say, it’s the best dungeon crawler on the NES.
B
The following two tabs change content below.