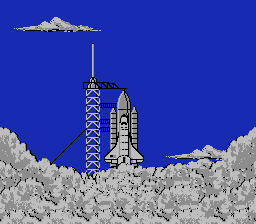 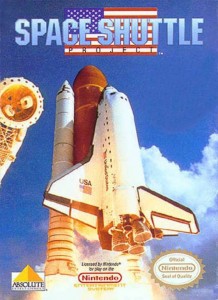 This is what a space shuttle looks like, kids.

The entire game is a montage of various shuttle launches rendered in 8-bit – pretty ballsy, eh?

Get your yaw, pitch and roll on with Space Shuttle Project, the space flight simulator that, much like an Altoid mint, is curiously strong. There are six flights to outer space, with four stages per flight. Three of the four stages – preparing for take-off, take-off, and landing the shuttle – involve similar elements on each flight. Prepping for take-off has you checking the oxygen, hydrogen, and boarding members of the crew within a stingy time limit. When you take-off and land, you’ll be shown a number of readouts for space shuttle-y things, like “valves,” “SRB separation,” “ET separation” (separating from E.T. is always the hardest). Each readout will ask you to do something a little different. For example, SRB separation will display a meter with a light blue segment. A cursor will move in the meter, you’ll hit ‘A’ to stop it in the light blue segment, and on to the next readout. Each flight always has one distinct mission, like launching a satellite into orbit without it hitting other satellites; saving a Russian cosmonaut from the cold grip of space (and presumably, the equally cold grip of Communism); and repairing space stations with oversized Lego blocks. With the space program currently on hold, Space Shuttle Project feels like a relic of a simpler, more innocent time – a time when America could make it rain billions on space exploration. What else were we gonna spend our money on in the ’80s? Public schools? Pfft.
B-
The following two tabs change content below.