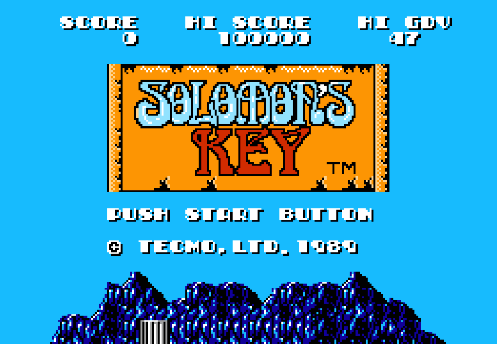 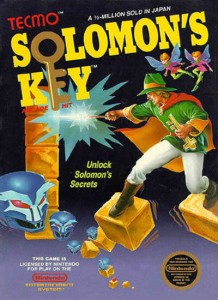 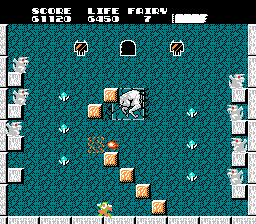 One of many, many deaths.

Solomon’s Key isn’t your standard NES slop pile. It’s half puzzler, half arcade game, all difficult. You’ll need a sharp mind and quick reflexes if you want to get past even the initial levels. At its best, completing a challenging level will make you feel like you’ve climbed the gaming version of Everest. But when you replay the same level fifty-plus times with no solution in sight, ripping one’s chest hair and copious mourning are the only reasonable courses of action. Play with caution. Enjoy the challenge.
Bricklaying, fireballs, key collecting: these are the activities Solomon’s Key thrusts upon your unsuspecting self. You play a wizard named Dana who can use his wand to create and destroy bricks. These bricks are crucial to Dana’s progression through the game. Many levels will place the key in awkward locations, only obtainable by a stairway of bricks or blocking enemy movement with your bricks. If your brick is touched by an enemy, it will disappear instantly, leaving you vulnerable and weak, despite your supposedly powerful magician status (luckily, you can re-direct some enemies with your bricks as well). You have fireballs you can employ, but they are always limited in number; best to use them when dealing with overly obnoxious enemies. Collectible items abound, though many of them do nothing but increase your point value (Solomon’s Key was originally an arcade title, after all). Some of these items will only appear the first time you try a level, so if you die and start the level again, the rare item will no longer be there. Not only does this encourage replay value, but pure perfection. As you will find out, should you attempt to conquer all fifty levels, perfection is nigh impossible to achieve.
Solomon’s Key might be one of the hardest games for the NES. Its devious level design forces you to think and act, usually at the same time. Unlike many difficult games on the NES, it is not an exercise in frustration. Each death refines and hones the player’s skill. Solomon’s Key is a beautiful, insidious beast of a game, and it deserves every retro gamer’s respect.
A-
The following two tabs change content below.