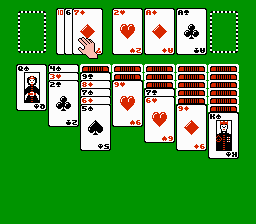 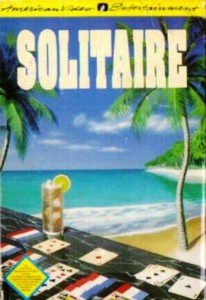 Nothin’ like setting up a card table on the beach and playing solitaire. This shot must have been taken in Florida.

End of the line.

Your brother or sister has played solitaire. Your parents have played solitaire. Your grandparents don’t know how to use a computer, and they’ve played solitaire. And, my friend, you have played solitaire, and probably for longer than you’d like to admit. Since computers started coming pre-installed with solitaire, it has become one of the most ubiquitous games of all time, beloved by all ages for its simplicity and addictive properties. But since you can boot up a fantastic version of solitaire on your iPhone, desktop, laptop, or tablet, why fire up Solitaire for your NES? No reason. It’s clunky, it’s slow, and God help your ears if you forget to turn the music down. Besides, solitaire engineers have made great advancements in the field over the last two decades. For example, double-clicking a card automatically places it in the appropriate pile. It’s a move we take for granted now, but don’t think you’ll be able to get away with futuristic moves like that in Solitaire. Then again, Solitaire is still solitaire, slow and outdated though it may be. If you’re hard up for a game, it’ll do. Just turn the music and the sound off, lest your ears decide you’re better off deaf. PRO TIP: if you really want to indulge in some antiquated solitaire shenanigans, grab a deck of Bicycle cards and engage with the material. Winning will be that much more satisfying.
B-
The following two tabs change content below.