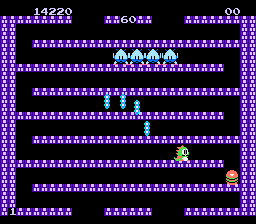 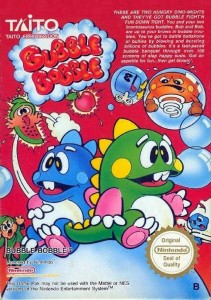 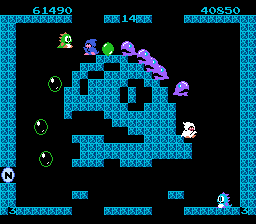 Monsta, monsta, give me the news…

These days, the mildly cute dinosaurs Bub and Bob are more known for their legendary, outdated puzzler series, Bust-a-Move (seriously people, stop buying those games – the formula hasn’t changed for fifteen years!). But before they turned bubble-loaded crankshafts with the greatest of care, they were spewing out bubbles, bobbles, odkins, and bodkins onto enemies in the “Bubble Bobble” series. Truth be told, this is another one of those “classic,” always mentioned NES games that I never spent much time with, so I was glad to finally sit down and play it in full. My feelings are definitely mixed. On one hand, I believe it’s probably one of the best co-op experiences on the NES. Going solo, as I did, I’m decidedly less enthused about its repetitive gameplay.

The main bad guy’s name is Super Drunk (ya rly), which leads me to believe that the Taito developers were having a wild night out when they came up with the concept for Bubble Bobble. The game makes a lot more sense if you think of it as some random drunken Japanese idea. The goal is to successfully trap the enemies of each stage in bubbles, pop them, collect their remains in the form of vegetables, and move on to the next round. Easy enough, but there are over 100 levels, and if you beat those, Super Bubble Mode gets unlocked and you have to go through 100 more levels. I will give Taito this: I’m pretty sure this is the first NES game I’ve come across that has multiple endings. Go through the game solo and you receive one of two bad endings. The only way to get the “true” good endings is to go through all two hundred levels with a friend. Yes, this game has replay value up the bub, but how much bobbling can one person stand?

For me and mine, I could only bobble my way through twenty levels. Yes, the levels grew harder as I went on, but I didn’t stop due to difficulty; the game features a handy-dandy continue option and password system, which is definitely necessary if you want to go deeper into the abyss. I just grew bored by putting enemies into bubbles level after level. It’s true, the level and enemy designs were cute (some level designs even allude to old Taito games, like Space Invaders) but it wasn’t enough to make me want to continue playing. Had I another person, I believe the game would have been a lot more fun. The levels are just big enough and include just enough enemies, that throwing another dinosaur into the mix would be chaotic fun – especially since you can bubble your teammate.

Alright, yes, it’s obvious the game was made for co-op. Otherwise, Taito wouldn’t have made the good ending available solely for two brave warriors trudging through two-hundred levels of bubble paste and smeared vegetable carcasses. But if this is the case, I’m going to go out on a limb and say they shouldn’t have even added a one-player mode. Then again, in 1988, one couldn’t get better replay value for their money. Two-hundred levels?! Even if one-hundred are just harder repeats, that’s good stuff. Argh, I don’t know. I’m conflicted and tired. The game’s boring, but it’s probably really awesome if I play the way drunken Taito developers want me to. BAM!