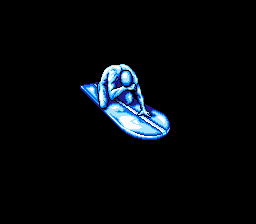 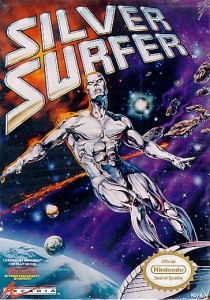 Silver Surfer is all chocolate underneath. 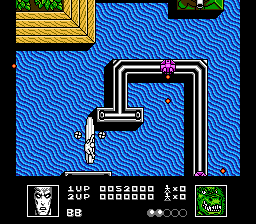 Invading the local mall for a quick bite!

Silver Surfer is a licensed shoot-em-up with a bad reputation. The Angry Video Game Nerd famously disparaged it in one of his earliest videos. It was recently called the #1 Hardest Video Game of All Time by RetroJunk.com (I disagree). Ask any retro gamer who has extensive NES experience what he thinks of Silver Surfer, and watch as they imitate the picture below:

Don’t cry for me… I’m already dead.
Silver Surfer isn’t just challenging: it’s unfair. If you get hit once, you’re dead. If you accidentally touch a wall or some other barrier (that may or may not resemble a barrier), the Surfer acts like he just got punched in the gonads, and falls off his board to his death. From a genre perspective, one hit kills are fairly standard in almost all shoot-em-ups. Indeed, the difficulty behind shoot-em-ups lies in learning how to maneuver around certain death at ridiculous speeds, whilst shooting everything in sight. This describes Silver Surfer to a tee. But since the main character is the Silver Surfer and not just a vulnerable ship, shouldn’t he be a tad stronger? If not a life bar, then a free hit if he bumps into a barrier. Should you punish yourself in sticking with the game, you will die hundreds of times, without exaggeration. 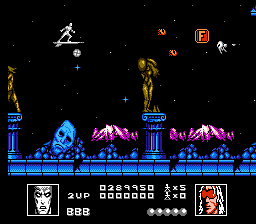 The statue’s face made me laugh out loud.
Here’s the crazy part: if you can stay alive long enough to upgrade your weapons, Silver Surfer becomes playable, and even, dare I write it, enjoyable. Gather enough floating ‘F’s and the Surfer’s firepower (including the rotating ball underneath his surfboard) will become powerful enough to take down the hordes of never-ending crap the game hoists upon you. Silver Surfer becomes fast-paced and engaging, with hypnotic music to drive you on… until you die again and lose whatever power-ups you may have gained. Many people will become aggravated long before they reach this point, however, and just turn the game off. I don’t blame them, though I do feel that, beneath the cheap hit detection and pathetic rendering of the Silver Surfer character, lies what could have been a solid shoot-em-up. Silver Surfer isn’t as difficult or as bad of a game as many make it out to be, but it certainly wastes its potential with poor game design.
C 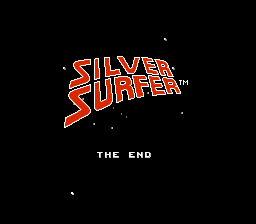 Even if you do beat it, this is what you get.
The following two tabs change content below.