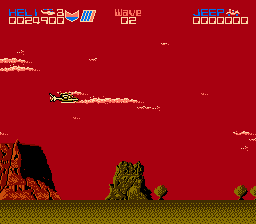 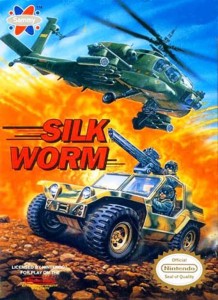 The best tag-team shmup of its day.

Calm before the inevitable crap storm.

Two questions you should ask yourself while engaging a shoot-em-up: 1) does it present a unique/interesting concept that enhances the genre’s repetitious nature? 2) does it make your finger bleed from tapping ‘A’ repeatedly? If the answer to both of these questions is “yes,” there’s a ninety percent chance the shmup you’re playing will be satisfactory. Silkworm succeeds in both respects. Not only will your thumb get a callous-forming workout, but by giving you the choice of piloting a helicopter or a jeep (or both, if you have an additional player), it introduces dual vehicular delights – a concept I’ve never seen in an 8-bit shooter.
Pick the helicopter if you want to play Silkworm as a more traditional shmup. It has two cannons – one aimed straight ahead and one pointing towards the ground – for greater shooting range and it’s easier to maneuver. But if you’re feeling frisky, pick the jeep. Its movement and firepower are more limited than the helicopter, but what it lacks in strength and mobility, it makes up for with tenacity. It can also avoid more of the airborne enemies and their missiles, a real plus. There are only two power-ups, a Twin Shot (for… double the shots) and a Turbo Boost; both are released by destroying a special enemy called the Snakehead. There are other emblems you can collect throughout the game, but they seem randomly generated and points-based. Gather enough of these emblems, however, and when you die, you won’t lose your power-ups. The true gift that Silkworm bestows on the player, however, is the two-player co-op. Having both the helicopter and the jeep on the battleground at the same time is a raucous joy, and the real reason for this game to exist. 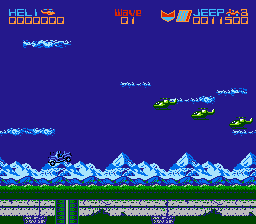 The jeep wants to fly too. Just be yourself, Jeep!
Without the dual-vehicle concept, Silkworm doesn’t have much to recommend. Outside of a few backdrops, the visuals are uninteresting and flat, and the music is neither memorable nor in-my-face. Controlling both the helicopter and the jeep respectively, though, provides two different experiences through the same game. Combine the multiple playthroughs with wonderful co-op, and Silkworm becomes worth seeking out.
B
The following two tabs change content below.