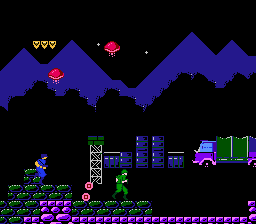 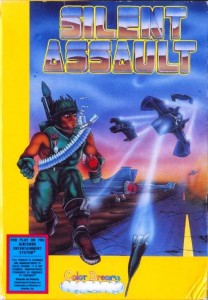 Doesn’t look very silent to me. 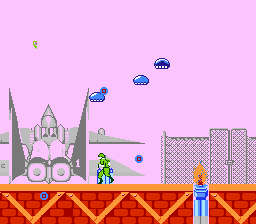 In a salmon-colored world, only one soldier can save the Olympic Torch from mini-UFOs.

Two breeds of Color Dreams’ games exist: the wicked and the weird. Silent Assault was only published by Color Dreams (Sachen did the developing honors), but it still manages to mix their trademark styles into a mutt concoction of nonsensical storyline, generic gameplay, and graphics painted by troubled kindergarteners. The Earth military (one-world government so soon?!) has been possessed by an evil alien force. Only you, the best soldier in the world who happens to be unpossessable, can take them down. Your lone weapon is bullets that look like knives, but they pack a wallop; every human or alien that tries to stop you will die from just a couple sharpened flesh piercers. Collect the tasty, courageous hearts that enemies drop to restore your life, and the Atoms that give you brief invincibility. For an action game, though, Silent Assault provides little action. Enemies are sporadic and sparse, and there are no power-ups for your weapon. What distinguishes Silent Assault from its 8-bit action brethren is its insane color palette. Not one aspect of any level – not buildings, enemies, or our beloved warmonger protagonist – is colored properly. Thanks to this lack of skill, Silent Assault gains a surreal charm that saves it from being yet another Color Dreams-related mishap. The seven levels offered are quickly conquered (plan to spend about forty-five minutes playing through the game), especially if you’ve played tougher action titles like Contra or… anything really. For most games, brevity would be a weakness, but it works to Silent Assault‘s advantage. The less time one spends with the game, the more one appreciates it.
C-
The following two tabs change content below.