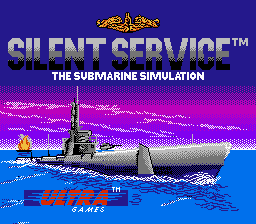 The Beav and Steve McQueen team up for the ultimate underwater adventure. 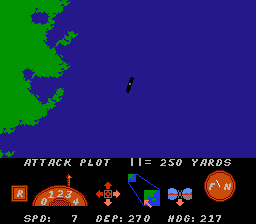 Silent Service‘s slow pace actually made me long for the sailing in Wind Waker.

Submarine sims are a dime a dozen these days,* but back when Bush the First was in charge, Silent Service was a one-of-a-kind trip into the life of a sub-captain. Control almost every facet of a sub, from the speed to the periscope, and most importantly, the torpedoes. There are three modes for you to wet your whistle: Torpedo/Gun Practice helps you learn the basics, while requiring you to sink four unarmed ships; Combat Tactics offers you six different battles against select enemy ships; and the War Patrols mode, which combines the free-for-all “exploration” of Torpedo/Gun Practice with the enemy battles of Combat Tactics. While modes with words like “Combat” and “War” sound enthralling, Silent Service is as slow-paced and frustrating as latrine duty. Battles seem to last forever, especially when the subs clashing continue to miss each other with their torpedoes. Exploring the map with your sub can be laborious too, depending upon your starting location. Submarines aren’t the fastest modes of transportation in the world, but they can speed along quite nicely underwater, yes? The only explanation: Silent Service was originally released in 1985 on various computers, which makes complete and total sense once you play it. It is a computer game in every aspect of its design, and it’s a curious decision on Ultra Games’ part to port it to the NES. Only gamers with the patience of Sean Connery and the deceptive good looks of Alec Baldwin will be able to stomach what Silent Service wishes to serve you.
D
*lol
The following two tabs change content below.