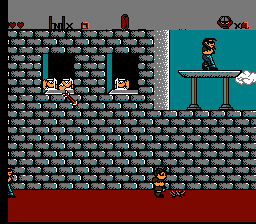 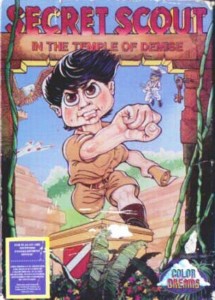 What happened to Secret Scout’s leg?

So does this take place during the 80s or biblical times? Secret Scout is confused!

What’s it gonna be, Secret Scout? Will you explore and conquer the Temple of Demise? Or will you curl up in a fetal position and cry, while Color Dreams’ horrendous nightmare entangles you in its poorly-constructed web of nonsense? You are Secret Scout, a Boy Scout with a dopey outfit, a Swiss Army Knife (only for emergencies, so no stabbing), and your main weapon, a jumping karate kick. Your main objective is to go through the Temple of Demise, kill bad guys with your furious kick, and collect items to aid your progress. Sounds pleasant enough, but this is a Color Dreams game, so decency is an illusion. Since your main focus is kicking people (you literally can not progress past some screens without killing enemies), the hit detection should be top-notch. It is garbage. Worse yet, the enemies’ attacks connect the majority of the time. The graphics are sludgy and dark, the music tinny and repetitive. I have so many questions: why is a Boy Scout the lead character of a video game? Why is he exploring an evil temple filled with obvious drug dealers and local natives run amok? Where is his squad leader and his back-up scout brethren? Most importantly, I didn’t enjoy my time in the Temple of Demise with the Secret Scout. All impotent back story would be forgiven if Secret Scout was fun to play. But it wasn’t and it never will be.
F
The following two tabs change content below.