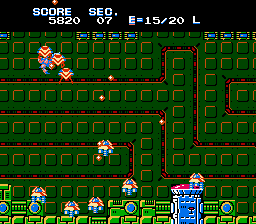 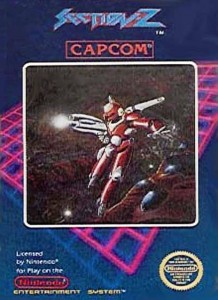 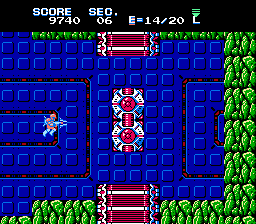 Stuck between a rock and a hard place… wait, where are the portals?

There’s no better “retro gaming” moment than beating an incredibly challenging game, and the NES is full of examples: Castlevania III, Ninja Gaiden I-III, any number of shoot-em-ups. You probably have a favorite title that you’re thinking about right now. It frustrated you to no end, but the sweet victory at the end was worth all the crushed controllers, all the cold sweat. Section-Z, a Capcom shmup, doesn’t balance frustration and challenge with reward. It’s pure provocation through an intoxicating (yet infuriating) labyrinth of similar-looking stages and hyper-aggressive enemies.
Section-Z starts off like any other shmup. You’re thrust into space at lightning speed. Enemies come racing towards you. You shoot three clusters of them as quickly as possible. Then suddenly, you’re sucked down into a seemingly abandoned space station. As you’re being pulled down, the space station door closes behind you, trapping you. The freedom of space has been replaced by a confined, claustrophobic area. You move bravely forward, only to find that there are even more space creatures inside the space station than out. It is here where you’ll spend the entire game.
Section-Z‘s enormous space station is comprised of three main levels, with each level consisting of twenty “sections.” After you blast your way through a section, you’ll reach a portal. This portal will contain two green beams shooting out the top and bottom, respectively. Enter the green light to go up or down to a different section. Depending on what section you’re in, you could choose the path that will take you to the end of the level, or the path that sends you careening back to the beginning; it really is trial-and-error (keep a pen and pad handy). Other times a red beam will appear out of one of the portals entryways, indicating that that section is blocked off; don’t try and enter the red beam, it will kill you. The goal of each level is to destroy a power generator, then face the main boss. Understand that it will take a steady resolve to progress in this game. Each section may be relatively short, but the waves of enemies that seek to melt your face are relentless. Numerous deaths will plague even the most tenacious gamer.

Don’t let the jellyfishes give you kisses.
Health and controls are two of the more fascinating aspects of Section-Z. You start off the game with twenty health points. If you get hit by an enemy’s projectile, one of your health points will disappear. If you get hit by an enemy itself, you’ll lose a life andget five hit points taken off instantly, but you’ll start at the beginning of the section. Lose all your hit points and you’ll be blasted to the beginning of the game. Thankfully, destroying chunks of enemies almost always results in health point tablets. Collect as many of these as you possibly can. As you’re flying, notice when you hit the ‘B’ button that your hero turns around and starts firing in the other direction. ‘A’ fires to the right, ‘B’ fires to the left. This is quite the useful feature later on when you’re surrounded by enemies from both sides.
Finally, upgrades. Get them, use them, don’t die or you’ll lose them. The Megasmasher covers the screen in a thick beam of energy, killing all in its path. The Flashburster fires in three different directions, but it has a short range. The Barrier protects you from a large number of projectiles. The Megaburster combines the best features of the Megasmasher and the Flashburster: three-directional fire that’s thick and covers long distances. There are also Shells, separate one-time only weapons that do damage to all enemies on screen. Compared to the ferocity of the weapon upgrades, the Shells are feeble and, when used, take off four hits of your life bar. Use only if you’re in a jam.
To Section-Z‘s credit, there’s nothing else like it on the NES. It’s a unique take on the shooter genre that impresses with its creativity. But innovative ideas don’t excuse the game’s overbearing difficulty, especially when the game asks you to beat it all at once. No passwords, no save points, nothing (apparently, the Famicom Disk System version of Section-Z had save points… *sigh*). Even with the awesome weapon upgrades, pulsating music, and solid controls, I found Section-Z to be more trouble than it’s worth. A disappointing, if noble effort.
C
The following two tabs change content below.