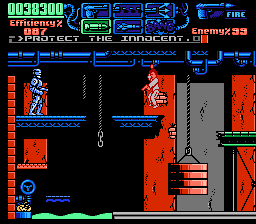 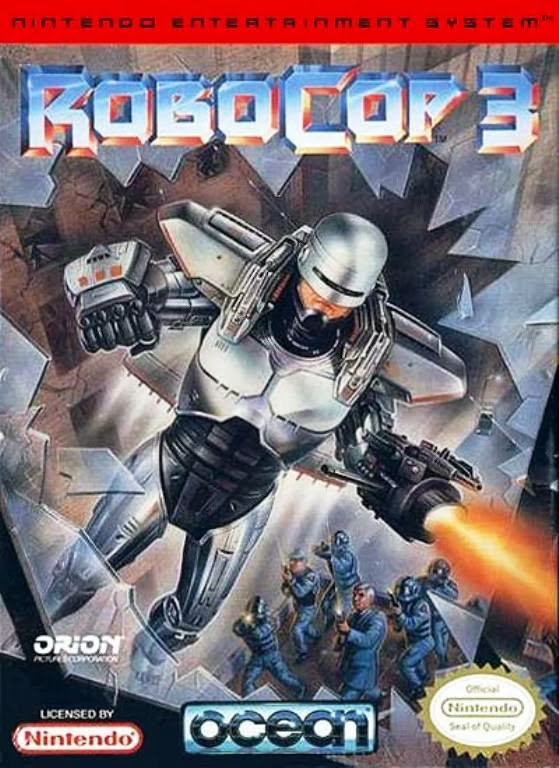 Matlock has had just about enough of your shenanigans, Robocop.

That thug is actually cross-eyed, hence why he’s not shooting directly at Robocop.

“Game Over.” Finally, after three arduous treks into the 8-bit Robocop Universe, these weary words expressed after Robocop dies, say it all. No more platitudes or worthless encouragement, like in Robocop 1 and 2. Nobody wants to keep playing this crap, Ocean, you don’t need to humor us. In Robocop’s third endeavor, he’s still very much ensconced in Old Detroit. Much like Batman and Gotham City, I don’t think Robocop could survive without the extensive crime that goes on there. If Old Detroit was rid of thugs completely and yuppie mini-malls replaced the brothels and back alleys, Robocop would be pushing pencils at a police desk job. Or, more likely, the Chief of Police would flip his “On/Off” switch to “Off,” stick him in a cabinet somewhere, and call it a day. Game over, man. Game over.
In Robocop 3, Robocop shoots people, jumps a lot, and picks up Power-Ups, both for his weapons and for his body. The Body Power-Ups can be used to heal his ailing robot body at the end of each level. Pick a body part – arms, legs, torso, head – that needs the most healing, patch him up, and get him back on the streets. There are five lousy levels in this game. Any more than five would be criminal, and Probe, the developers, knew this. The enemies are always on your tail and they never stop shooting you. It will take three or more bullets to kill them, unless you have an upgrade. But yeah, Robocop 3. It’s terrible, just like the last two.
D-
The following two tabs change content below.