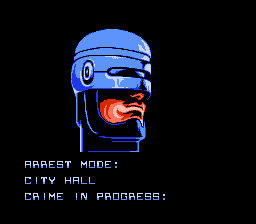 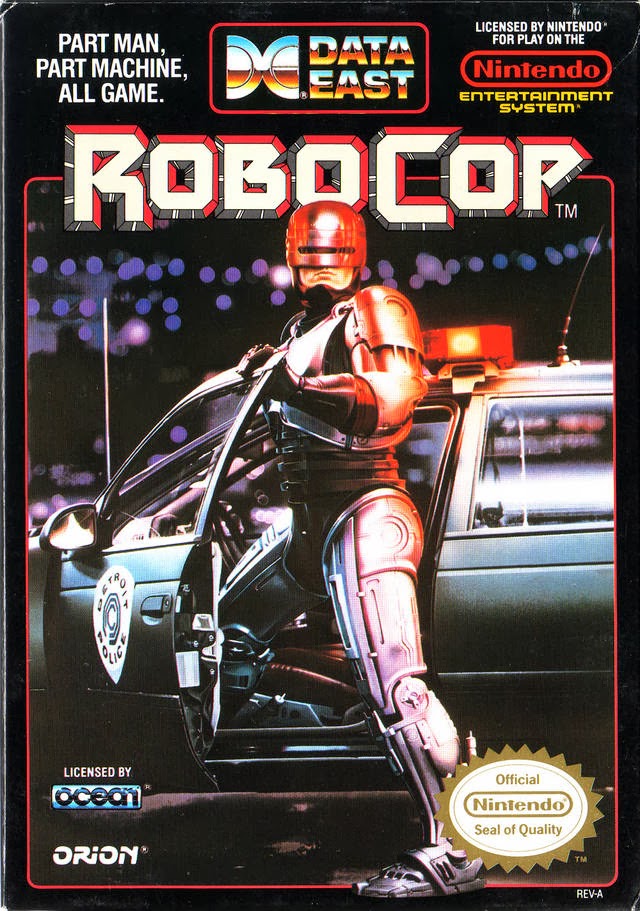 Robocop dares you to play his game. 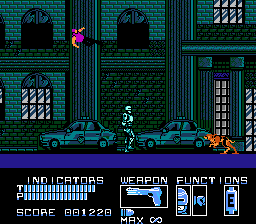 The bottom menu looks more complex than the game actually is. Punch the dog, shoot the dude in purple, and keep walkin’.

“Robocop is never discouraged. Let’s do that again!” These two sentences are taken directly from Robocop‘s Game Over screen. The encouraging words are a nice change from “Too Bad,” “You Lose,” or even a simple “Game Over,” but they don’t make me want to jump back into the world of Old Detroit again.
Simply put, Robocop is the perfect example of the mediocre licensed NES title. It has one ultimate goal: allow players to inhabit the character of Robocop through six repetitive levels. Robocop doesn’t care if it offers gamers anything beyond that cheap thrill, and indeed, it really doesn’t. You shoot and punch your way through six drab, monotonous levels. The gameplay reminds me of a mix of Kung-Fu and a slower-paced Contra, without the ability to jump. Generic Thugs come at you from all sides. Kill them or just avoid their attack. Robocop has two life bars: a battery bar which drains on its own as he walks through a stage, and an energy bar which only decreases after he’s hit. There are plentiful power-ups to refill both bars in each stage, so keeping your life steady isn’t a great challenge. Poor hit detection and boss battles are where Robocop really grinds my gears. There’s a thin line between your punches connecting to the enemies, versus them avoiding your attacks and running into/through you. Bosses will take off large chunks of life in mysterious ways (the second level graphics are so bad, I couldn’t tell if the boss was shooting at me or destroying me with his mind). Also, they don’t have a life bar, and it’s difficult to tell when you’re actually hitting them. No thanks. Robocop might never get discouraged, but I sure do.
D
The following two tabs change content below.