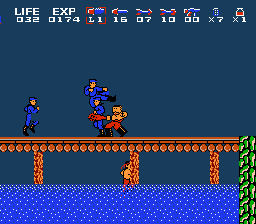 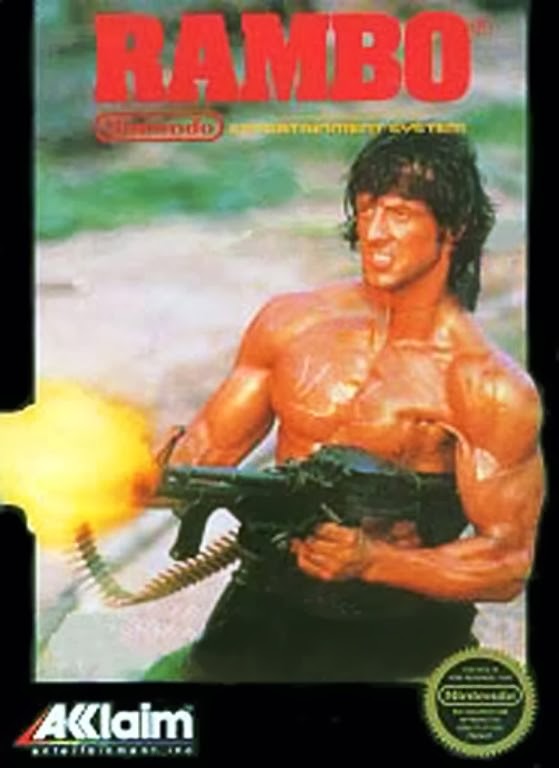 Good luck finding any bullets for that gun.

The Viet Cong, ignorant of Rambo’s presence, practice their techniques on each other.

“To survive a war, you gotta become war.” Rambo a.k.a. Sylvester Stallone spoke that infamous line in “Rambo: First Blood Part II.” It’s Rambo’s mantra, and it should be yours if you decide to play his NES game. Poor hit detection, confusing layouts, and cheap AI are the demons you’re battling against. Bats, spiders, flying skull heads, and Viet Cong come in torrents, thirsting for your first (and last) blood. Use your trusty combat knife to slice them up and pray you don’t get hit while doing so. While you do acquire other weapons, like throwing knifes, arrows, grenades, and bullets (the latter comes far too late in the game), your main weapon will likely be your knife. Because your knife is short, you’ll need to get chummy with each enemy to kill them. Killing enemies gives you experience a la Zelda II (strangely, Rambo emerged about six months prior), but the experience isn’t worth the frustration. Navigating the 8-bit jungles wears down a man’s mental state, as well. If you’re unsure where you’re headed, you can waste ammo, health, and sanity searching for the right direction. Thanks to the help of a map, I plowed through about half the game in twenty minutes before succumbing to waves of Viet Cong. Without it, I’d have been lost amidst a sea of green. Map or not, this war isn’t worth fighting. Leave it be, soldier.
D-
The following two tabs change content below.