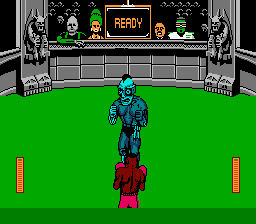 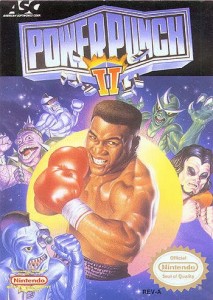 The bout to knock the other alien out.

Three bizarre facts about Power Punch II:
If any of you are Punch-Out!! fans, this information might make you want to pick up this game. Don’t. Power Punch II has none of the spirit or whimsy of the original. Beam Software failed to understand the inherent appeal of Punch-Out!!: the rise of the underdog.In Punch-Out!!, you’re a nobody (Little Mac) fighting to the top of the boxing circuit, to eventually reach, and hopefully knock out, Somebody (Mike Tyson/Mr. Dream). Training montages are woven between fights to show that Mac’s no slacker. He may be little, but he’s got guts. The implication was, if he can achieve success despite his limitations, so can you, the player. In Power Punch II, you’re “Mark Tyler” (originally Mike Tyson), the heavyweight champion of Earth and you’re taking on alien boxing champions all across the galaxy. Mark Tyler’s never been knocked out. Mark Tyler’s got an Olympic gold medal. Mark Tyler’s always been successful. Where’s the struggle? Where’s the relatability? None of this would bother me if Nintendo hadn’t originally sanctioned Power Punch II as a sequel to Punch-Out!!
Power Punch II also adds a mandatory and obnoxious training time before each fight. If you succeed at your training, you’ll conquer each ensuing fight. Fail, and the fight will be more challenging than it needs to be. Training time consists of hitting the gloves of a training robot, Mr. Robotto. He has a pink glove on his right hand and a red glove on his left. The gloves are constantly shifting up, down, and back to the center, and you are to hit each glove when they glow, with ‘A’ corresponding to the red glove and ‘B’ corresponding to the pink. Hit five glowing gloves in a row, and your heart, stamina, and speed (all represented in icons on the bottom of the screen) will raise slightly. Hit six in a row and your energy will increase. Continue to do this before the minute-long timer runs out and you’ll be quite the beefcake. But therein lies the problem: Mark Tyler is already a beefcake. He needs to train, sure, but the success of his training shouldn’t correspond to whether he can beat the upcoming fight. Basically, your success in Power Punch II amounts to whether you can excel at the training segments. This is stupid. Punch-Out!! should be about timing in the ring, not in the training closet.
If you excise the training, Power Punch II is a poor man’s Punch-Out!! It looks the same, it feels the same, but something’s not quite right. The graphics aren’t as clean, the controls aren’t as tight, and the opponent weaknesses aren’t as readily apparent. I’m ecstatic that they lost the Mike Tyson license to this, and that Nintendo didn’t slap their name anywhere on the game. In trying to besmirch the good name of Punch-Out!!, Power Punch II deserves to be forgotten.
D-
The following two tabs change content below.