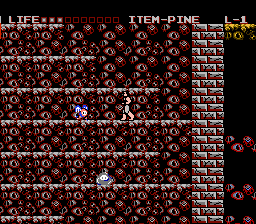 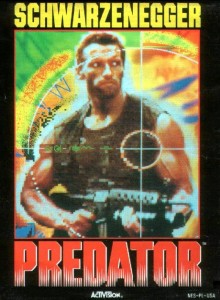 Jellybeans are some of the most difficult enemies to kill in the jungle.

I don’t ask much from a crappy licensed action game, yet my grievances with Predator are legion. The graphics looks like cheap Play-doh, the controls are terrible, cheap deaths are limitless, it doesn’t represent the movie it’s based on, and it tries to innovative in stupid and pointless ways. That’s a king’s ransom of terrible right there, but I’d like to focus on the so-called “fresh ideas” that Predator implements.
Pointless Idea No. 1: you start off each level equipped only with your fists. Whatever weapons you acquire in any level disappear at the beginning of the next level. Never mind that most enemies are ground-based and can’t be hit by your fists because you can’t crouch and hit at the same time. Always get the laser, if you can.
Pointless Idea No. 2: after level 5, the levels branch off in two different directions. While there are thirty levels total (and six Predator battle stages), you’ll only ever play about twenty-four or so. There doesn’t seem to be any purpose behind the branching paths other than to add replay value. If you skipped certain levels during one playthrough, you could play them on the second playthrough – if you even make it that far.
The Predator battle stages are silly. When the stage starts, you’re attacked by orbs aplenty. It’s better to shoot as many as you can because they drop ammo that can be used against Predator. Once you reach the Predator, he’ll stay on one side of the stage and toss skulls at you, while you hopefully pump him with your special bullets. Why are there six of these Predator battles? Shouldn’t the Predator have been the final end boss? The lesson here: if you’re gonna embellish on your source material, embellish smart. Predator should remain lost in the jungle of licensed abominations.
F
The following two tabs change content below.