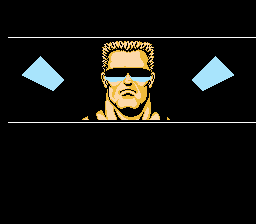 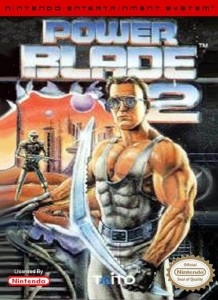 The best boomerang in town, she is. 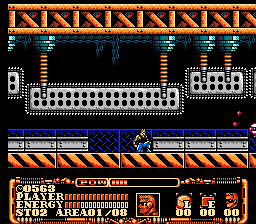 How’s Duke Nukem gonna get out of this one?

The pen might be mightier than the sword, but the Power Blade smashes the pen into a dark, inky mess. Exaggeration? Hyperbole? Think again, Junior. The Power Blade returns with a vengeance in Power Blade 2. The Blade’s co-star/partner-in-death, the 22nd Century Warrior, is here to wield and destroy, in that order. The partners’ misadventures feel about the same as they did in the original Power Blade – destroy anything robotic – but with a couple curious additions. In the first Power Blade, you could find a robot suit and wreck shop with it. It was a bad-ass feature for as long as it lasted: three hits and the suit was gone. In PB2, you acquire four unique robot suits after you beat the mid-boss of the first four stages. The Newt Suit allows you to walk on walls and the ceiling; The Wet Suit allows you to swim quicker; the Rocket Suit allows you to fly; and the Patriot Suit provides two orb shields that circle around you. These suits all serve unique and entertaining purposes, but watch your energy meter. If it drains completely, the suits don’t disappear, but they do come off and you’re back to your typical wife-beater existence. 22nd Century Warrior also has a new slide, which looks “heavily inspired” by Mega Man’s (his knee is raised when he slides, for crying out loud). In fact, acquiring powers after beating bosses coupled with the slide shows Natsume was paying perhaps a little too much attention to Capcom’s then-flagship series. Perhaps all it takes to sway the Power Blade is a Mega Buster.
The original Power Blade may have been inspired by Contra and other similarly-styled action games, but it remained a unique entity. Unfortunately, Power Blade 2 weaves Mega Man elements so deeply into the gameplay that they’re hard to overlook, at least for me; less homage, more complete rip-off. To frustrate further, PB 2 is almost unbearably difficult at times. Enemies are relentless and later stage design doesn’t work (Hello water stage!) if you don’t have all of the suits. Power Blade 2 works occasionally, but it doesn’t thrill like the first entry.
C+
The following two tabs change content below.