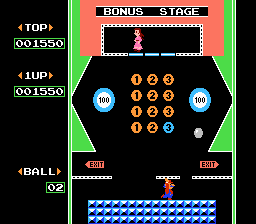 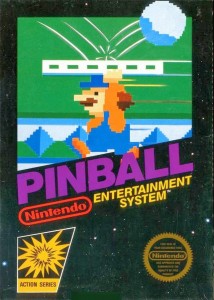 Mario decided for the orange-and-blue ensemble. I want to know where he got orange shoes… 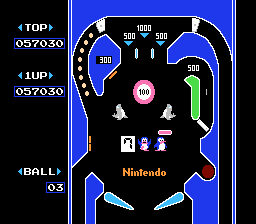 The top half of the table, complete with marine animals! 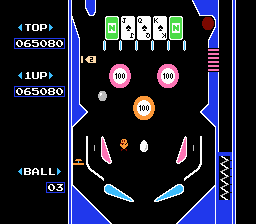 The bottom half of the table. Baby ducks equal stoppers!

Pinball: there’s absolutely no mistaking what this game’s about. Mario and Pauline guest star in Nintendo’s one and only first-party developed virtual pinball game. Despite being old as sin (it was among the first eighteen games to release for the system back in 1985 and its arcade origins go back to 1983), Pinball still entertains thanks to its well-developed pinball table and excellent ball physics. There’s no story here, no extra objectives, just points, points, points. At the main menu, you can select Game A or Game B. Game A gives players lighter, floatier balls, while Game B adds weight to the balls for more realistic physics. The pinball table is split into two. The first half has your typical bumpers, point balls, and point lanes, along with some adorable seals and penguins. The seals will bounce balls on their nose (more points!) if you ascend up the upper-left point lane and collect all the white dots. The penguins will blink numbers if you descend down the upper-right point lane. Turn the penguins into all 3s, 7s, or back to their normal selves to get massive points. On the lower half of the table, there are cards you can flip with your pinball, targets to hit, ducklings to unhatch – all for raging point glory. The bonus stage is where you’ll find Mario playing Breakout with a pinball, in attempts to free Pauline. Once Pauline falls, Mario can catch her, lead her to safety, and you’ll earn?… even more points. Pinball is an entertaining smorgasbord of strangeness that doesn’t overwhelm the player with useless clutter. Rudimentary virtual pinball at its finest.
B+

Before Nintendo hired Mario full-time, he worked part-time in their pinball machine.
The following two tabs change content below.