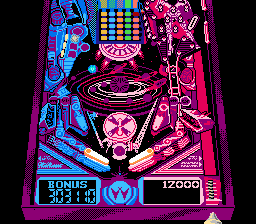 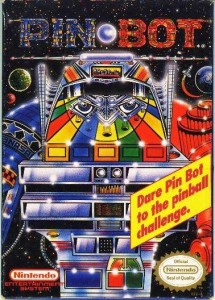 You heard the box! Dare him!

No amount of hand exercises or 70s instructional videos will make me good at Actual Pinball, but I’ve been able to rack up a high score or two in the Virtual Pinball realm. Pin Bot aims to elevate Virtual Pinball above its three-dimensional brethren by adding some slight objectives. In the middle of Pin Bot‘s course is a solar system with nine planets. The main “goal” of the game is to light up each of these nine planets by hitting the lit targets directly below Pin Bot’s face. This can take a long time, so while you’re trying to fly around the galaxy, you collect points by hitting any and all areas on the Pin Bot playing field. There’s the Vortex which has three holes, all worth different point values. There’s the Light Grid, which I like to call Pin Bot’s Fantastic Technicolor Beard. Lighting up all of the targets on the grid will cause Pin Bot to open up his hollow, soulless eyes and make room for a pinball. Shoot one pinball in each eye and Multiball Play will commence. Should you score Solar bonus during Multiball, the play field will alter slightly and release enemies like blobs and snakes that will try to eat your ball. Pin Bot has a lot of robot wizardry and fancy lights blinking hither and yon, but at its metallic core, it’s still just a pinball game and a mighty fun one at that. Rack up points any way you can and don’t worry about objectives unless you’re into that sort of thing. Domo Arigato, Mr. Pin Boto!
B
The following two tabs change content below.