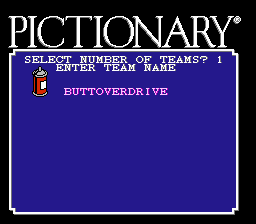 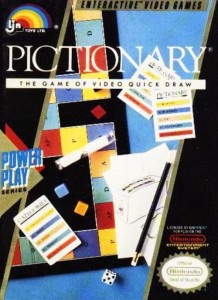 You’ll need excessive amounts of power to want to play this version of “Pictionary.” 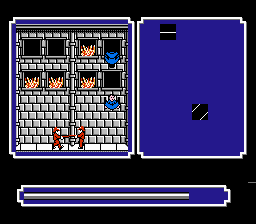 Remember when you played “Pictionary” and you had to rescue people from a burning building? What a mirthful evening that was!

As you read this, somewhere on the earth, a group of people are playing “Pictionary” at a party. Depending on the group of people and the amount of alcohol ingested, “Pictionary” is the greatest game in the world or one that should have been left in the past, along with “Sorry” and “Trouble.” But Pictionary for the NES? I know what you’re thinking because it’s what I was thinking: how does that even work? There’s no NES tablet to draw pictures on. The NES doesn’t have the most realistic graphics. Even if a person can’t draw very well on sketch paper, at least their drawing isn’t pixelated. Pictionary doesn’t work on the NES, but not for the reasons you’d expect.
There are two modes to choose from: Alternative Mode (which is actual “Pictionary,” complete with a wobbly, hard-to-control drawing mechanism) and Regular Mode. Regular Mode is “Pictionary,” but instead of drawing, you play minigames that, depending on how well you do, slowly uncover the picture in question. These minigames have a time limit, which can decrease quicker if you get hit by an enemy or let a fat person drop to their doom (read on). The four minigames, in order from “Normal” to “Insane,” are as follows: “Paint Invaders,” a take on Space Invaders – the more Invaders destroyed, the more picture you see; “Space Mission,” where you collect blue balls on pillars of different height, while avoiding weird Koosh creatures; “Box Delivery” involves moving boxes from one side of the screen to the next, and avoiding Koosh creatures; lastly, “Fire Rescue” which involves rescuing hordes of obese people out of a burning building. Read that again, let it really sink in. Now, it’s impossible to not let many die. Impossible. And the number of fat people who died, just because I was trying to get a clear look at a poorly rendered image, makes Pictionary one of the most disturbing NES games of all time. Also, the pictures are terribly rendered and you need to be a pro at the minigames to get enough of the picture uncovered to have a slight, remote chance at winning. But mostly, the deaths.
D-
The following two tabs change content below.