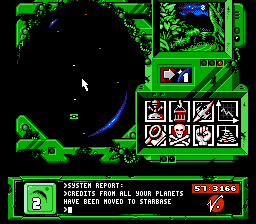 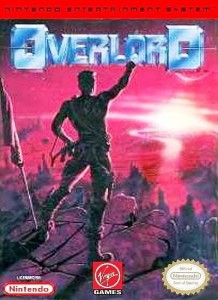 Good night, Cleveland! Yes, we did rock your face!

Starbase lords their wealth over all the other lowlier planets. Their uppance will come soon enough!

Koei might be The One Strategy Game Developer to Rule Them All on the NES, but Virgin makes a noble, confusing attempt with the computer port, Overlord. Your goal is to become supreme ruler or “OverLord” over four alien systems, each with a certain number of planets. Whichever system you choose to conquer at the beginning dictates the difficulty – the green alien guy has eight planets, and is the easiest, while the ominous bald red guy has thirty-two planets and is the hardest. Once you log in to the actual game, prepare to be befuddled. Even if you have the manual or an FAQ (thanks GameFAQS!), it’s incredibly difficult knowing what on-screen options to choose at what time.
After extensively perusing the Internet, I gathered this much: you have to “conquer” one planet at a time; “conquering” meaning that you make the planet suitable for human life, raise farms, sustain energy, etc. First, you must buy an atmosphere processor and make each planet able to maintain human life. After the atmosphere is processed, your planet will turn into either a Metropolis, a Tropical landscape, a desert, or a volcanic landscape – it’s an absolute crapshoot. What your planet turns into dictates your next move. Got some tropics? Lay down some extra farms. Got a city? Tax the crap out of your folks, they can afford it. Sounds like fun, eh? Well, it did to me too, but the application is confusing as hell. Micromanaging resources on several different planets in real-time becomes a burden, especially when you suddenly get attacked by rogue aliens out of nowhere. Once Overlord turned into a planet juggling act, I abandoned the mission as quickly as possible and set up camp on a balmy alien getaway, Sunscreen 9. Nothing around but red skies, acid pools, and foreign alcohol.
C-
The following two tabs change content below.