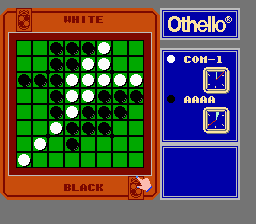 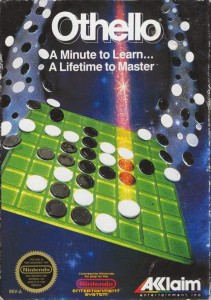 It’s anyone’s game at this point… but probably white’s.

From the smoke-stained 1960s backgrounds to the antiquated pseudo-checkers gameplay, Othello proudly displays its grandmotherly leanings. But don’t let the old-fashioned get-up scare you off. Othello is a minor achievement, an easy-to-learn, difficult-to-master game that’s fun for five minutes or five hours. The goal is simple: take control of the game board using either black or white pieces. The game always starts with four pieces in the center of the board – two black and two white placed diagonally next to each other. Let’s say you’re black and you need to convert the white pieces into black pieces. In order to do that, you must trap a white piece between two black pieces. The white piece will then flip over and become a black piece. This tango between opposite colors continues until the board is filled with an array of white and black. Whoever has the most pieces on the board wins. Sounds like any mumbly Joe Six-pack could dominate, but believe it or not, there are specific strategies for winning. For example, getting your pieces in the corners of the board. Dominating a corner or two is almost a sure-fire way to win, because once your piece is in the corner, it can no longer be converted into your opponents color. Two-player is the best way to go, but the computer’s no slacker. Even on Level 1, you’ll be hurting for awhile. Othello might feel like it hails from “The Lawrence Welk Show” era, but the gameplay, like checkers, remains timeless.