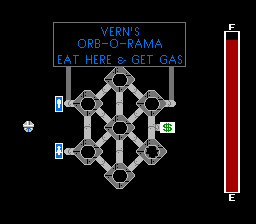 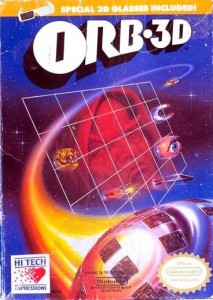 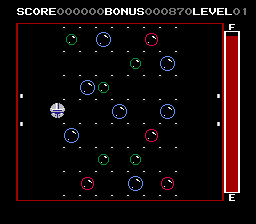 Level 01, the circliest of all the levels

Orb 3D should have been called Pong II: Now With Objectives and Stuff because that’s pretty much what it is. There’s a story about an evil wizard and black holes, but it just complicates hitting the orb (in miraculous 3D) back and forth between paddles in space. In between the paddles are what Orb 3D‘s manual describes as “puzzles.” Calling the levels “puzzles” is a stretch, as it’s basically just crap to do while you’re playing Pong. Said crap includes popping bubbles, playing tic-tac-toe, moving numbered squares, and attacking multi-colored animals in the correct order. You accomplish this crap by pressing ‘A,’ which causes your orb to “dive” into the playing field. Once the orb touches a bubble, animal, or what-have-you, it gets knocked off of its straight trajectory, and a paddle rescue is always in order. If the orb goes beyond the paddle on either side, its fuel gauge will lower significantly. Press ‘B’ to head over to the Orb Refueling Station, a nightmarish sequence that has you attempting to fit the orb into small holes, just to refuel. Not only is it hard to fit the orb into the holes, but the holes are only open for a short amount of time. In order to refuel completely, you need to enter at least five of the seven holes, so you need to be an Orb 3D champion just to accomplish the minor task of refueling. But why did Software Toolworks even bother with this refueling portion? Why can’t completing the crap in each level slowly add to your fuel tank? Orb 3D has clunky controls, bizarre gameplay, and a stupid story. Orbnauticus, we seek wisdom. Why does your game suck so?!
D

It doesn’t matter that the gas is a buck a gallon. You get what you pay for.