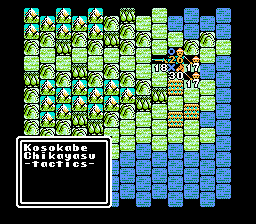 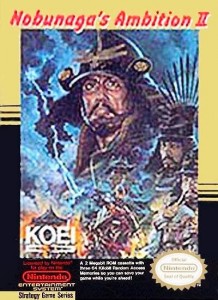 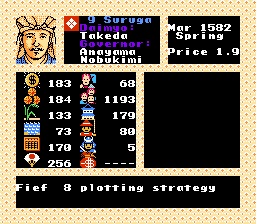 Put that in your fief and smoke it!

I wasn’t surprised to discover that Koei made a sequel to Nobunaga’s Ambition. They are perhaps second to Capcom in the list of Japanese developers that run franchises into the ground (Romance of the Three Kingdoms VIII? How many times can kingdoms romance each other?!). In keeping with the two companies’ storied traditions, Nobunaga’s Ambition II feels less like a sequel and more of an update. It expands what are the same basic scenarios from the first game, while adding some new features (samurais do your bidding!) and a helluva lot more fiefs!
Nobunaga’s Ambition II begins with a couple different scenarios: Warlord Rivalry sees you choosing a “daimyo” (feudal lord) and fighting against other daimyos for “fief” (feudal states) control; Nobunaga’s Ambition gives you the ability to play as Lord Nobunaga (finally!) and defend yourself against war on both eastern and western fronts. In the latter, you can also play as another daimyo and pit yourself against The Nobu, but I would seriously advise against that (Nobu plays hard and rough). This latter option sounds like a cool new scenario, but it’s more of the same in a crunched amount of time. You’re still going after other daimyos who are against you, like in Warlord Rivalry or the original Nobunaga’s Ambition. Many of your commands are carried out by your team of samurai, who need to be micro-managed along with your fief or fiefs, as the case may be. Keep a razor-sharp eye out on your gold, flood control, food supply, debt, trade, soldiers, castle defense, etc. You want to go to war? Be more of a diplomat? Spy on other fiefs? Extend your fief-dom? All fine choices, and all options to consider.

The squares during war-time are a lot smaller in this game.
Nobunaga’s Ambition II slaps a glossy coat of paint atop the drab-looking original game, but from a non-Koei fan’s perspective, fails to do much of anything new. The production values are obviously much higher. The graphics are cleaner and the colors more vibrant and alive with the passion of the daimyos. The historical perspective is interesting, and Koei’s attention to detail, like usual, is exhausting. If your ambition for the first one rent Nobunaga in twain, please embrace Nobunaga’s Ambition II for its overwhelming similarities.