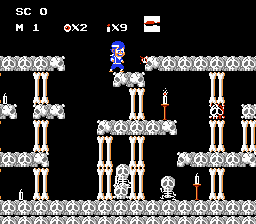 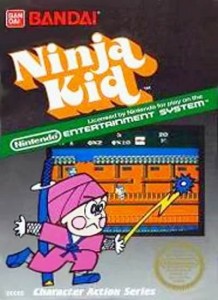 Throwing a shuriken (even a poorly drawn one) at the television is never a good idea, kids.

See those candles? Spark ’em with your flame buddy to ditch this catacomb.

Ninja Kid would be downright adorable – worthy of a pinched cheek, even! – if it wasn’t so weak-willed, weird, and not all that fun to be around. The game starts Ninja Kid (that’s you!) on a world-map, with different open-mouthed environments to explore, like pagodas, graveyards, houses, etc. Each area consists of a simple arcade stage that requires certain tasks to complete, like defeating or collecting all of a certain type of enemy, lighting candles (for serious!), or standing atop a kite whilst defeating enemies. Once you figure out the goals to each stage, they can be potentially conquered quickly, but only if you have “the right stuff” i.e. lots of practice. It only takes one hit to kill Ninja Kid, and after your three lives are up, no continues, you’re back to the beginning pagoda. Difficulty doesn’t bother me in games, if the game itself is worth playing, but Ninja Kid doesn’t have much going for it. The stages are uninspired, short, and repeat frequently, with only slight changes, and the gameplay is largely point-driven and repetitive (keep throwing shurikens at constantly regenerating enemies. There’s your FAQ.) I can admire Bandai’s unique arcade-like take on the then-brand new “platformer” genre – singular stages containing certain objectives to gain lots of points – but it completely fails to entertain. I ninja-banish Ninja Kid to obscurity, now and forevermore!