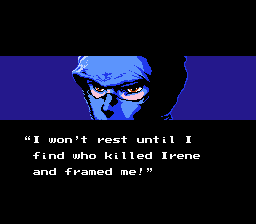 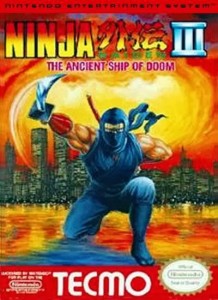 Ryu set fire to the rain before it was cool. 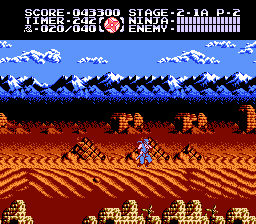 Ninja Gaiden III might be (more) difficult, but it’s the best-looking game of the series.

Ninja Gaiden III is the bad boy of the trilogy, complete with greased-back hair and a pack of smokes rolled up in the sleeve. It’s the title that you love for its rebellious, always-in-your-face attitude; or hate for the borderline insane difficulty the game expects you to enjoy. For whatever reason, Tecmo assumed that American gamers liked their games to bludgeon them senseless, and ratcheted up the difficulty beyond the Japanese version. Stunning, no? A more-ridiculous-than-usual plot, gorgeous backdrops, and new secondary moves complement the unwavering action. Know this going in: Ninja Gaiden III expects nothing less than total devotion. If you’re not willing to give all that you have, and then give some more, don’t even bother.
Ninja Gaiden III hurts more than a basketball to the temple, and I can’t stress that enough. Let’s start with the hit detection. Ryu’s always bounced backwards upon taking a hit from an enemy, but in this game, he does so only sometimes. Other times, he absorbs the hit and blinks. The latter you can miss entirely, if you’re not playing close enough attention. I’ve died multiple times thinking I had more life than I actually did, and I attribute it to him not always bouncing backwards. I know what you’re thinking: isn’t the elimination of the bounce backwards a good thing, even if it’s only occasionally? It would be, if the barely-visible blinking replacement wasn’t equally frustrating.
Enemies also take off exorbitant amounts of life. In the previous games, the most a standard enemy would take off would be three hits. Here, it varies wildly. I’ve had four hits taken off me by an enemy in the second level. Worse yet is when you’re getting ping-ponged between enemies, your life constantly draining, and you can’t get out of it quickly enough.
Some of the sections of each stage contain ridiculous challenges, like the rising lava found in 2-2C. The challenge itself is enough to give you arthritis, but even worse, if you die in 2-2C, you have to go all the way back to 2-2A. This might not sound bad, but Ninja Gaiden III has ridiculously long stages; some stages have up to five sub-sections, and said sub-sections are sometimes as long as one stage from the original Ninja Gaiden.
To add misery to despair, the game has only five continues. Sure, it might sound like enough, but the other games had unlimited continues and they weren’t nearly as difficult as this. Many of you who have not played the game will read this and go, “Ha! I can take it. I’m an expert gamer.” Aren’t we all, until a game like this comes along and humbles us. 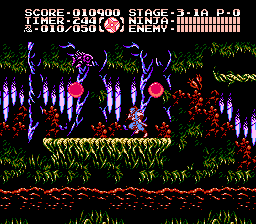 Much like the honey badger, purple piranha “don’t care.”
Like any game whose challenge rocks us like a hurricane, it’s up to us to decide whether the reward is worth the abuse. To that end, Ninja Gaiden III‘s production values are the best in the series. One can’t deny the exceptional visuals, both in the cutscenes and the levels themselves (the levels seem to have been inspired by the Mega Man series, in my opinion). Ryu’s main new move is being able to hang underneath platforms suspended in the air, and it is incredibly useful. While you can only use your secondary weapon while hanging, the ability to hang and ascend, or hang and jump is always well-executed; better still, when you’re hanging and you get hit, you don’t fall off and die – thanks Tecmo! The music is chip-tuned gold, and is almost as good as Ninja Gaiden II‘s near-perfect soundtrack. Ryu controls smoother than ever, and the level designs (besides being gorgeous) are well-varied and unique. All of the aforementioned could make the difficulty go down smooth…
Or not. To me, Ninja Gaiden III feels off, and I attribute this to the presence of a new director, Masato Kato (Hideo Yoshizawa was the director of the first two games). He felt the series needed to go in a new direction, thus Ninja Gaiden III‘s science-fiction feel*. Unfortunately, the Ninja Gaiden series has always been half-story, half-gameplay, but outside of the brilliantly conceived opening scene, the story is half-baked and removes the human element that was crucial to the stories of the first two games. As an action game on the NES, Ninja Gaiden III is a merciless challenge that many will welcome. As a game built within the Ninja Gaiden series, Ninja Gaiden III is the least of its ninja brethren.

*Thanks to Wikipedia and IGN for this particular info