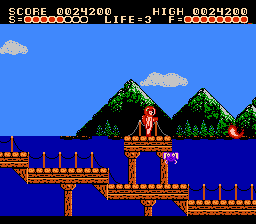 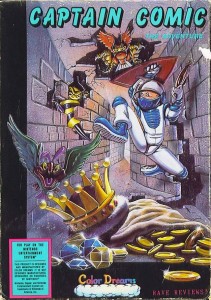 All gamers want a crotch shot of a dope in a spacesuit, right? Ugh, Color Dreams, come on. 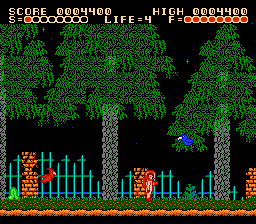 You play as a creeper in the local park. Luckily, the wildlife are on to you.

A Color Dreams game named The Adventures of Captain Comic couldn’t, and shouldn’t, feel like anything less than a warning sign: abandon hope, all ye who play. Why would anyone want to play as a redneck in a spacesuit named Captain Comic? Looking at that lazily drawn cover fills me with vehement rage. Yet the game succeeds because Color Dreams had nothing to do with the development. All credit goes to Michael Denio, who developed the entire game by himself. Still, Captain Comic might be the best thing Color Dreams ever produced: solid controls, well-orchestrated 8-bit renditions of famous classical pieces, and challenging platforming gameplay.
What is Captain Comic’s purpose, his destiny? To recover the lost treasures of Osmic (let’s all groan together) on the planet of Nambi. Sounds about as competent as James Cameron’s “Avatar II: Pandora’s Reckoning” script, but all it means is that Cap Com (ha!) has tons of locations to explore. Much like the Mushroom Kingdom, Nambi has every environment possible: caves, castles, the friggin Moon – even a Killer Bee Shed! No matter what part of Nambi you’re in, collect every item you see. There will be moments where you wonder what to do. Enemies are re-generating and flying at you with no discernible pattern, and you’re stuck behind a wall, wondering what the Samhain is going on. You missed an item. Go back and look for it. Take your time too. No clock countdown means you don’t have to rush through the game, and absorb enemies into your glowing red suit. Upgrade Cosmic’s weaponry, find the treasure needed to progress, don’t die. It’s surprisingly simple and it works because Color Dreams kept their desecrating mitts off of the game. Captain Cosmic may be the most atrocious character on the Nintendo, but his adventures deserve a second look.
B
The following two tabs change content below.