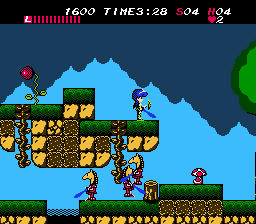 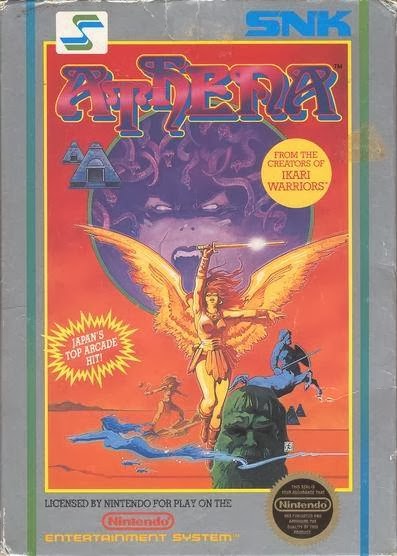 Don’t be fooled – you play as a goofy anime girl. 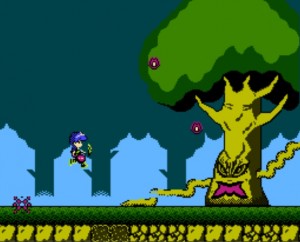 Nothing good can come from this screenshot.

The days of the NES were different, to say the least. To come up with ideas for their games, Japanese developers would randomly pick names and concepts from other cultures from an empty ramen bowl, mix in some cultural strangeness, and boom, an NES game was born. SNK – a company I admire for their ability to repackage King of Fighters over and over again, among other reasons – birthed Athena into the world, a remarkably bland side-scroller with poor controls, and obscene difficulty.

I’m going to go ahead and guess that, unless you, the reader, grew up with this game as a child, you’ve never played it and possibly have never heard of it. There is every reason for this. Before SNK found their niche with fighting games and top-down shooters, they tried a little of every genre, including side-scrolling. If a company is not used to making games within a certain genre, and their drive behind the game is “We’ve never done this before. Oh what the heck? Let’s give it a go,” do not expect good things.  Athena was the result of this mentality. This goddess of wisdom, who seemed bad-ass in all those Greek tales, is, in this NES version, a flake. She acquires pieces of armor over time by searching through dirt clods with swords. Even if you get the best armor, the best weapon, the best everything (squat down on the first small mushroom you see in level 1-1 – you’re welcome), you run a risk of losing your armor the more you get hit. Fair enough in games that play fair, but the enemies that come at you here are extremely erratic and have no pattern. You can kill three horsemen/Jar-Jar Binks and five more will come rushing at you from across the screen to replace them. Sometimes they can jump, sometimes they can’t, so you really have no idea what the enemies can do until they do it. God help you if you want to jump over them. Unless you press the perfect combination of “Up” and “A,” your epic warrior jump will become a prissy little leap into the enemy. It’s moments like the latter that make you want to ram a fist into your NES machine, especially when pansy thrusts into the air make deaths so frequent and needless. 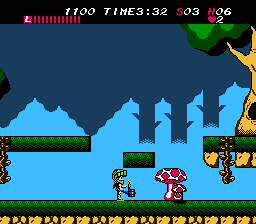 Despite being the goddess of war, Athena can get stuck behind a mushroom for long lengths of time.

The only real creative thing that Athena has going for it is that instead of having to save a bratty princess, you have to be a bratty princess. But who wants that? At least if you’re a beefcake like our friend Astyanax, you can say, “See ya later, babe” to the girl you’re rescuing and run off with the fairy chick who’s been by your side the whole time. But if you’re playing a bratty princess and you save the world, you’re only going to become more vain and pompous because you think you can do everything. Such women should be in other castles.