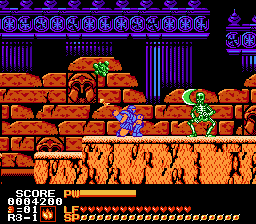 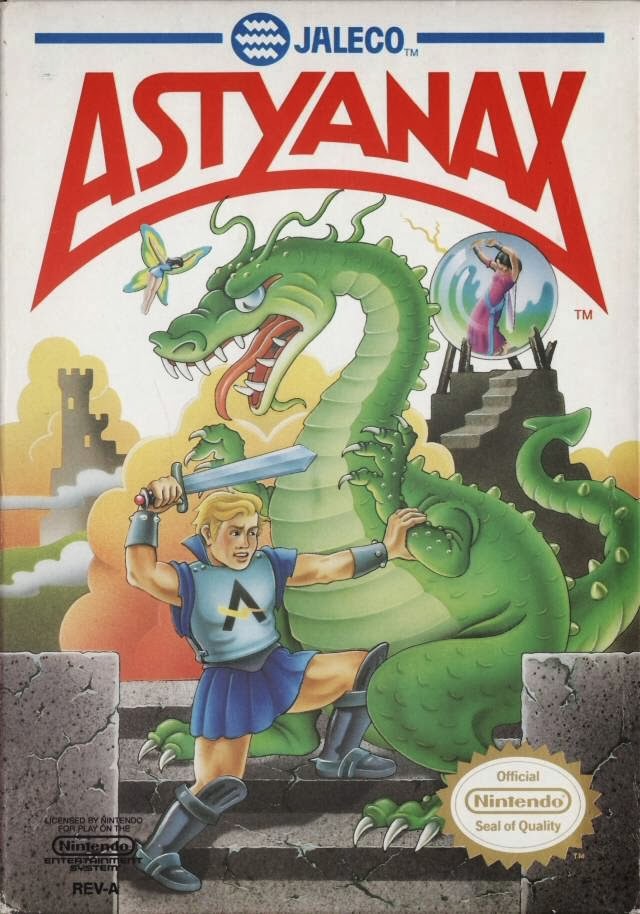 Clutching the dragon’s arm ought to hold him off. 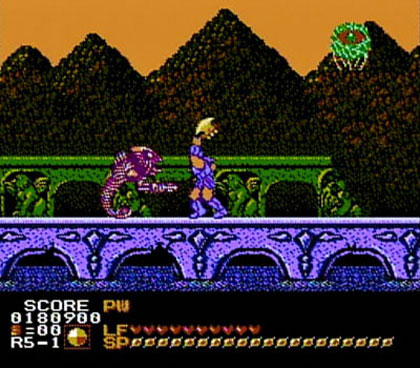 Brother gonna mess that chameleon up.

Isn’t it always the way? You’re a freshman in high school with aspirations of football greatness and sleeping with all of the pretty cheerleaders, when suddenly you’re whisked away to a  strange land to save a princess who’s been haunting your dreams?! I know it happened to me at least twice in high school, which is really what makes Astyanax so relatable.

According to the introductory cinema scenes, the young freshie’s name is Astyanax, which he thinks is “Greek or something.” Either the boy is a dullard or his parents were negligent (or both): “Astyanax” means “high king of the city” and was a character featured prominently in Greek mythology (several different myths surround him, hence why I’m not expanding on this). Astyanax is your typical armored beefcake who likes to SMASH! things in a mondo generic side-scroller that slightly resembles Castlevania. On the bottom of your screen, you have lots of hearts, you acquire power-ups here and there, and you attack enemies that constantly reappear. The powerups will upgrade your weapon, replenish your hearts or special power. When you press ‘up’ and ‘B,’ you unleash a fireball attack, destroying everything on screen. Should you die, your weapon upgrades get taken away, making it even harder to progress or care about the game. Each level is fairly short, and of course, ends with a boss that vaguely resembles characters featured in Greek mythology, like the Medusa. The story is told through cut-scenes, though they’re not nearly as flashy or interesting as, say, Ninja Gaiden‘s. The music wants to be as epic as the latter game, but there’s a real lack of creativity in the compositions. 2-2 is especially appalling: the main section of the song sounds fine, but is soon punctuated with some blotchy fart noises that ruin the aural experience.

Astyanax, like many NES games, began its life as an arcade game, so there’s a possibility some features got taken out upon conversion. The principle of the game – move right and destroy things – is likely the same. The game’s features aren’t all bad: controls are solid, as good or better than Castlevania‘s similar controls, and some of the level design is very atmospheric and spooky. Nevertheless, you’re better off playing the games that Astyanax liberally borrows from.