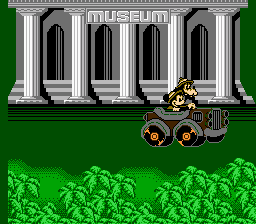 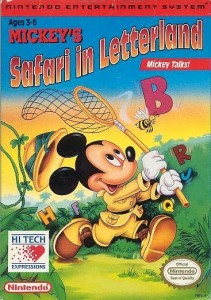 Mickey TALKS! Man, does he talk… 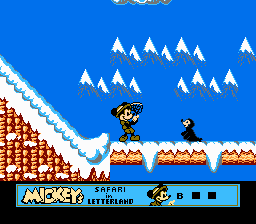 Poaching is one of Mickey’s many talents.

Before Mickey decided that capturing numbers was more his bag, he traveled all across Letterland in search of the missing alphabet. As any English major will tell you, letters are far more interesting than numbers, and thus, Safari in Letterland is ever-so-slightly more enjoyable than Adventure in Numberland. Instead of just collecting one letter and leaving the level, in each level of Letterland, you have to capture three letter words, like Cat, Bat, Fan, Pig, etc. Only after you’ve spelled out the word in each stage can you collect the letter you need to re-assemble the alphabet. It’s cheesy, and like Numberland it takes hardly any time to complete each stage (even on Super Advanced Mode, which I assumed would give me some modicum of challenge), but it adds something to a duo of games that barely have anything. There’s a wider variety of levels, ranging from the Yukon to the Caribbean to swamps. Once again, Mickey can’t die, although there are more enemies strewn about the levels to hinder your progress (if Mickey touches them, he falls over and gets dizzy, like he’s just been thrown out of a bar). Despite Letterland slightly exceeding expectations, this was never going to be a good game. If you can only choose one terrible Mickey “edutainment” game to to thrust upon your child in hopes that he’ll learn while playing video games, you can make it Safari in Letterland, but you still probably shouldn’t.
D
The following two tabs change content below.