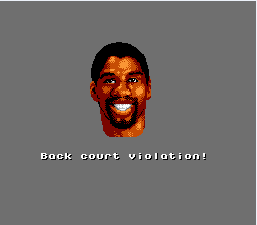 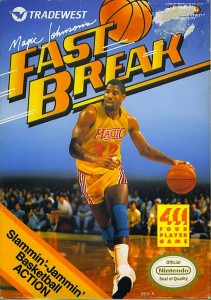 I’ve always wondered how one slams and jams at the same time. Teach me, Magic! 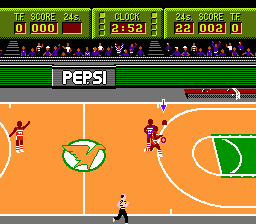 This game should have been called Pepsi Presents: Tradewest’s Magic Johnson’s Fast Break, The Game (Sponsored by Pepsi)

“Fast Break is awesome! It’s like a 3-pointer at the buzzer!” This is a quote from the man himself, Magic Johnson, on the back of the box of the game. Was it not enough for Magic Johnson to have his name in the title? Did he also have to endorse it on the back? Did his likely seven-figure deal for Fast Break require him to be so brazenly positive towards it? Well, Mr. Johnson, I’ve never played a real college/NBA basketball game, so I don’t pretend to know what making a 3-point shot at the buzzer feels like. But I’m willing to bet that achieving such a goal during a game was exhilarating for you. Magic Johnson’s Fast Break, despite its good intentions, is not exhilarating. It’s standard two-on-two basketball, with five difficulty levels, no stats, no player/team options and surprisingly, the inability to play as one Magic Johnson. Instead, Magic’s disembodied, smiling head pops up every now and then to tell you you made a great shot or call a foul. Thanks, Magic, for telling me I suck with a smile. The grin makes the pain go down easier! Despite the game’s minimalist design and lack of options, it controls and plays adequately and, for more good times, supports up to four players. You and three other people can wonder why Magic Johnson isn’t in a game that bears his name and play a perfectly average game of basketball whilst doing so.