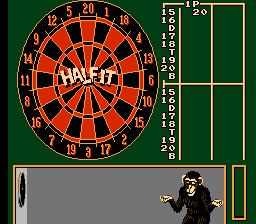 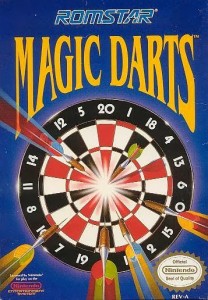 From the makers of Baseball Stars II comes Magic Darts! Look at them zoom!

Look at what this poor ninja is reduced to.

Well, here’s a new one: virtual darts. There’s not a whiff of magic on display, unless you count chimps and robots playing darts as magical (it’s more curious than magical, but not much surprises me these days). Otherwise, this is straitlaced, generic stuff. You have six different game types to choose from: 301, 501, 701, Count Up, Round the Clock, and Half It. If you’ve ever played an actual game of darts, you know that the typical 301 (or 501 or 701) game is just throwing darts on the board to reduce your score. The first person to get to zero – exactly zero – wins. Count Up is the opposite: throwing darts on the board to increase your score. Round the Clock requires that you hit 1, then 2, and go around the clock/board until you hit 12. It’s incredibly difficult, and unless you believe in the power of magic guiding your dart-filled fingers, skip it. Finally, in Half It, players begin with 40 points. Each player has three chances to hit certain assigned numbers to add to their score, or else the game will split the score in half. There are three meters you must stop before you can throw a dart. The first represents the dart’s trajectory, the second represents the pitch of the dart, and the third represents the power. All enthralling stuff, but unless you have a gang of three rowdies and a Four Score, I beg you to reconsider. What are dartboards these days, forty bucks? They might not be magic, but they’re real.