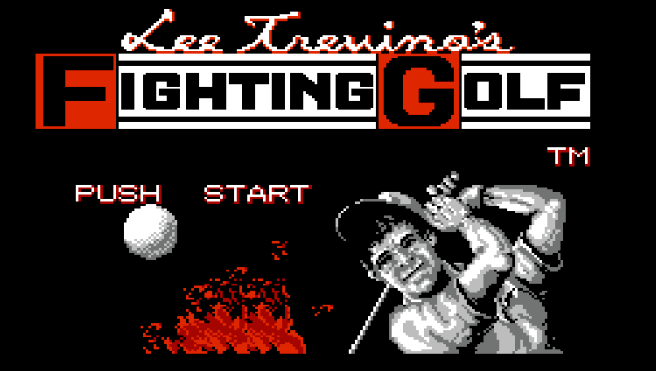 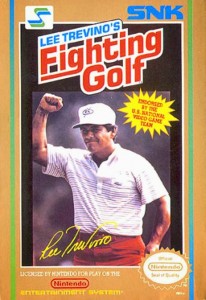 There was a U.S. National Video Game Team? 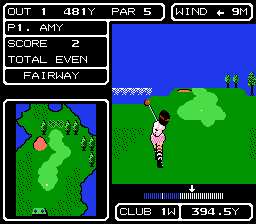 Probably one of the nicest looking golf games for the NES

If Lee Trevino ran at you with a nine-iron, you would do one of two things: run like hell or find the nearest golf club and battle him. Perhaps the world is ready for a fighting game where golf legends face off against their younger, more ambitious counterparts. It would be weapons-based, of course, or should I say club-based. Wedges do more damage, but don’t discount putters. Putters are sneaky, mischievous, and the only club you can use in both regular golf and putt-putt; dual-wielding would yield fantastic results. Unfortunately, Lee Trevino’s Fighting Golf is really just Lee Trevino’s Mostly Average Golf. Each character is as stereotypical as possible. There’s a panty-showing girl golfer named Pretty Amy, a goofy Japanese guy, Miracle Chosuke, and my personal favorite, Lee Trevino himself, Super-Mex! The latter was apparently Lee Trevino’s nickname (that just raises further questions!), but if you didn’t know that already, you’d be blown away by SNK’s blatant I-don’t-give-a-fluff mentality. The golf game itself is standard, but playable, if you can successfully follow the instructions. Basically, you have to hit ‘A’ three times in order to actually hit the ball: once for your swing meter, once for the direction you want the ball to go, and once to hit. If you can master this – which is much harder than it sounds – you’ll enjoy yourself. I couldn’t, but I’m a fighter, not a golfer.
C+
The following two tabs change content below.