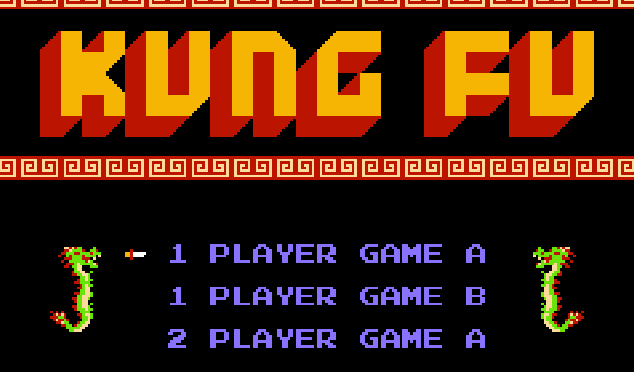 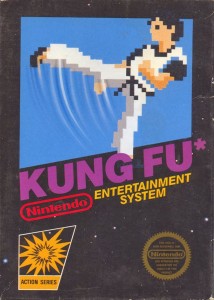 Kung-Fu (warning: does not contain any actual kung-fu) 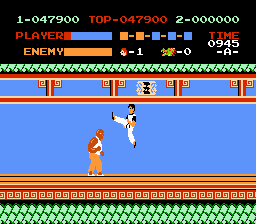 And by kicking over his opponent, Kung-Fu Man realized he would spend the rest of his days in a wheelchair.

Kick, punch, it’s all in the mind. Or in Kung Fu‘s case, it’s all that you do. Kung Fu is one of the original NES launch titles, so don’t go into this expecting a wide array of technically impressive attacks. ‘A’ is punch, ‘B’ is kick, ‘Up’ is jump: be content with this and you will go far. Each stage sees you progressing either to the left or to the right, while piles of guys run at you, begging to be embraced by the lightning within you. Most guys you simply knock away with one hit, like so many abused punching balloons. Others, like the knife throwing guy and the short elven folk, require extra hits and a keen eye. To keep the game interesting, occasionally baubles filled with snakes will fall from the sky and dragons will appear, blow fire, then disappear. Each level has a boss whose difficulty ranges from “wait, that was it?” to “that bugger just took all my life with one hit!” The background graphics, music, and all-around gameplay are the same in every level, which is awesome if you’re a fan of repetition. I personally get sucked into Kung-Fu every time I play it, even though it’s incredibly dated and not that good of a game. For me, the speed at which the enemies advance towards you keep the game (mildly) interesting. I also have a score to settle: I have yet to make it past the large black guy at the end of the third level. There’s still two more levels! I want to save Sylvia from Mr. X! Even in ’85, Kung-Fu wasn’t Nintendo’s finest hour, but it was another solid addition to a surprisingly varied original lineup.
B-
The following two tabs change content below.