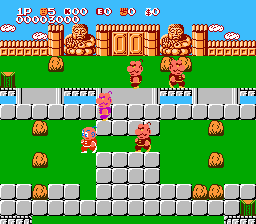 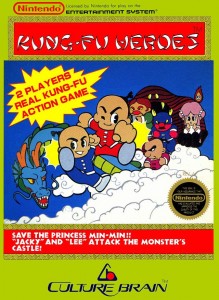 The Big-Nose Clan is out for blood.

Kung-Fu Heroes is a short, repetitive, addicting monster of a game. It’s a game that doesn’t really deserve to be played, but you play it anyway. You ask yourself, what in the world is going on? Why do I have to destroy exactly twelve enemies in order to advance to the next level? Why are the levels essentially squares where enemies continuously pour in from the sides? Eventually, after a few levels of constant punching or flip-kicking onto enemies and squashing them, you go with it. You shrug your shoulders and embrace whatever type of kung-fu this game supposedly offers. You find that, by punching the blocks in each environment, you collect treasures and sometimes power-ups. These power-ups supposedly hurt distinct enemies in certain levels, but it’s hard for you to know where to unleash them. You hold onto them for safekeeping and hope that a simple punch or flip-kick will do. On the fourth stage of each round, a scary dragon creature will attack you and make all the other enemies disappear. Defeating this creature proves to be impossible for you, but thankfully, he disappears after a set-time. He’s not a boss, though. There are no bosses, no real sense that you’re accomplishing anything other than kicking or punching blocks and enemies. Do you feel satisfied? You shrug your shoulders. You continue playing until the end – thirty-two levels – possibly because you have nothing else to do with your time or possibly, just maybe, there are hints of a good game in Kung-Fu Heroes. It truly is difficult to say.
C+
The following two tabs change content below.