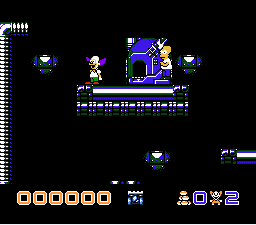 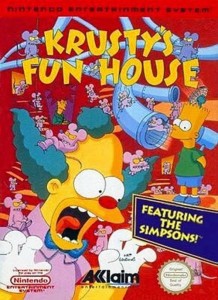 I like that Bart’s smiling while Krusty’s being attacked by rats. 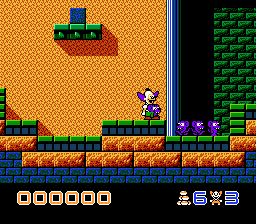 This screen cap explains everything you need to know about the game, and yet, it’s so vague…

I’m all for watching hours of “The Simpsons” on my local Fox affiliated station or on my stacks of Simpsons DVDs. But I can only play about fifteen minutes of any number of Simpsons games, especially the early ones. Even the arcade game, while nostalgic, isn’t as fun as you remember (sorry, everyone). Krusty’s Fun House is one of the better early Simpsons game entries in that, it’s a unique idea, it’s definitely playable until the end, and the controls don’t make you want to scream profanities at the sky.
If you’ve ever played Lemmings, you’ll have a basic grasp of Krusty’s Fun House. Krusty the Clown, for whatever reason, has been charged in leading dozens of rats to their demise. Each level is a mix of getting the rats to Bart’s Rat Stomping Machine (patent pending) and destroying large snakes and blocks with random items. It’s as strange as it sounds, and each level contains an equal amount of fun and frustration. It’s always fulfilling figuring out how to get the rats to ascend or descend to their final destination, but it can be pull-your-green-fuzz-out annoying to get there. The later levels particularly feel like they were crafted by Pinhead or Jigsaw, sans the eventual deaths (but hey, they’re all clowns, right? Bros before hos!). If only there was a little more variety in both the level design and the gameplay. Rats always need to climb blocks to get sucked through holes to get crunched by Bart, the end. Lemmings includes several varieties of creatures, along with various gameplay options like weaponry and destructible environments. Perhaps it’s not fair to compare the different games, but Krusty’s Fun House would be vastly improved by drawing further inspiration from it. Either way, having a go in the Fun House is a lot better way to spend your time than helping Bart save the world or destroying Space Mutants. As Selma would say to Troy McClure on their date in the episode, “A Fish Called Selma,” “I had a pretty good time.”
B-
The following two tabs change content below.