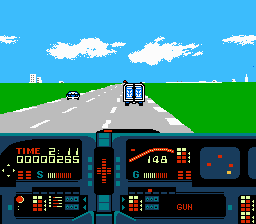 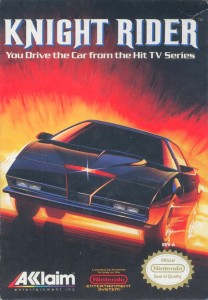 Good thing you have a gun equipped.

Disclaimer: I can’t relate to anyone’s fond memories of David Hasselhoff’s adventures with a snooty talking car, as the show went off the air when I was a baby. I can say that, compared to other NES racing games, Knight Rider comes in somewhere around the middle. Believe it or not, this really hassles my hoff, as there’s a lot to admire about the game. In Mission mode, you have to keep track of your gas meter, time limit, and shield, on top of avoiding all oncoming traffic, especially the red cars/trucks which will shoot at you. You also have a gun and a jump feature, both of which work well. All of these mechanics add much-needed depth to the traditional NES racing style, but unfortunately, Acclaim only gets about half of them right. Gas runs out far too quickly, and while you can acquire more by shooting special yellow item cars/trucks, you’re just as likely to get more time or another item you probably don’t need. Your shield is likewise too weak, considering you’re driving KITT the Wonder Trans-Am.  A couple hits and KITT will explode, leaving nothing but a charred corpse, surprisingly well-coiffed hair, and shattered dreams. The gun works ok if you’re at a distance, but don’t shoot the devilish red cars up close unless you want to get pelted with bullets. The good news is, in Drive mode, you’re free to simply drive through the levels without worrying about enemies. Unfortunately, you still have to worry about gas, time limits, etc. which seems to defeat the purpose of having a drive mode. Then again, KITT wasn’t made to “drive.” He was made to serve death to legions of terrorists, while spouting witty quips to hide his true masculinity. Or something. I never watched the show.
C-
The following two tabs change content below.