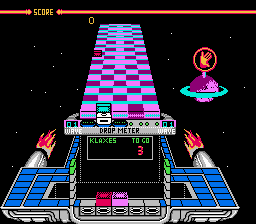 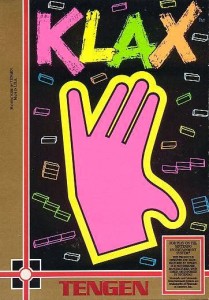 Electric Light Orchestra should have composed the soundtrack for this game.

Klax is a bold slap to the face of Tetris. Klax says, “Screw your outdated Soviet imagery and folk tunes. I’m going to be Tetris for the neon, opulent Nineties. Instead of shaped-blocks falling like manna from the heavens, simple Lego square pieces falling from a conveyor belt in space because God doesn’t exist. Your primitive lengthy stacking field is no match for my condensed rectangular field. Sure, I’ll include the ability to get a ‘tetris,’ but I’ll call it a ‘Klax.’ And my players will be able to get Klaxes horizontally, vertically, and diagonally with only three blocks of the same color. Yeah, diagonally, I know. Take some notes. Perhaps the biggest overhaul to your aged gameplay are the inclusion of objectives. My levels aren’t just blocks falling faster and faster until you can no longer see straight. I have goals my players need to meet in order to beat my levels. Get three diagonals in a row. Sound easy? That’s because it’s only level three. Why don’t you start on level 11 where you have to get fifteen klaxes to progress? You can’t because you’re too backwards? That’s because the era of the Soviet Union is over. Capitalism and freedom won. Klax for a new decade, baby! In the puzzle business, you either embrace progress or rust like so many iron sickles.”
Wow, Klax is a windy bastard, isn’t it? I’d still rather play Tetris, but Klax is fun if you’re looking for a new spin on the Tetris-esque sub-genre of puzzle games. So much for progress.
B-
The following two tabs change content below.