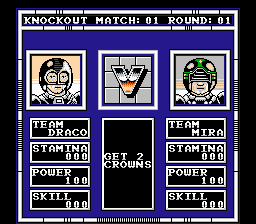 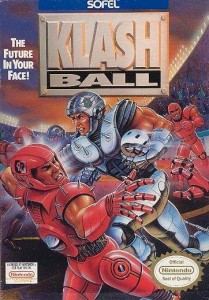 Despite what this cover shows, you don’t actually play outdoors, surrounded by adoring fans. 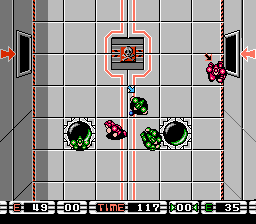 If KlashBall is the sport of the future, then it really needs to stop playing like soccer in a racquetball court. Four beefcakes face off against four other beefcakes on a claustrophobic court for possession of the “klashball.” Pick one of three teams, choose either Knockout mode – a single match against one other team – or if you want your fill of KlashBall and then some, pick League mode, which pits you against ten other teams, one match after another. The gameplay is essentially a fast soccer game on a cramped, closed court, but at least KlashBall controls well. Switching between players is automatic and never a burden, and when you’re in control of the ball, it’s easy to glide along the court. Scoring is another matter entirely. The computer-controlled goalie is the best goalie since ::insert amazing goalie’s name here::. It’s absolutely insane trying to get a shot off of him, and the only time I did was when he was distracted with one of my other players. AI madness! Added frustration for me was trying to knock down the opposing team and failing, despite the fact that they could knock me down and take the klashball, no big deal. KlashBall keeps things fresh by adding tile powerups on the court, but for me, the action was so fast and/or furious, that I never went out of my way to pick them up. Perhaps the latter, along with my crippling disability for playing any sport at any time, is the reason why I suck at KlashBall.
C+
The following two tabs change content below.