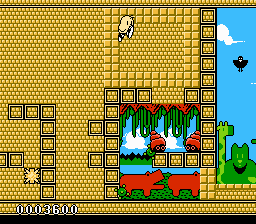 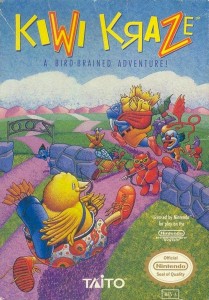 I’m going to guess that this game sold poorly for obvious reasons. 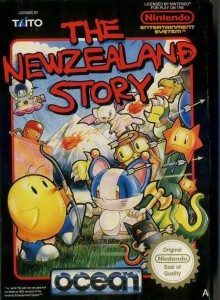 This is the original title and cover for Kiwi Kraze. Much, much better and more accurate to the game.

I’ve never been to New Zealand, but I’m pretty sure it’s amazing there. Any country that gives the world the “Lord of the Rings” trilogy, Flight of the Conchords and kiwi birds has to be a special place, indeed. Kiwi Kraze kicks New Zealand’s awesomeness up another notch. It’s a bizarre, endearing platformer that has you playing a kiwi and rescuing your kiwi brethren from zoos all around New Zealand. Cartoony guards and other zoo creatures will try to stop you, but you have an arsenal of lances, bombs, and lasers to keep them at bay. Instead of huge, open expanses, the levels actually feel like zoo enclosures designed to keep the kiwis trapped. Narrow paths with spikes around the borders of the area are common. Another clever touch: hijacking certain enemies’ flying clouds to propel yourself upward or around obstacles. You also don scuba gear when you jump into the water, leaving those prone to cuteness, such as myself, with severe squee aneurysm. There are secret warps to discover, unique boss fights (get swallowed by a whale and blow him up from the inside!), and most of all, a main character who’s so adorable, even his death scream will leave you squealing for joy. The little quibbles, such as the kiwi’s poor jumping skills, are overshadowed by the amount of creativity and sweetness that went into this game. Score one for the island country that could.
A-
The following two tabs change content below.