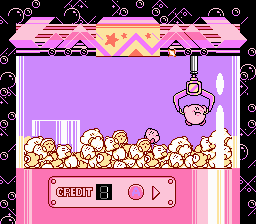 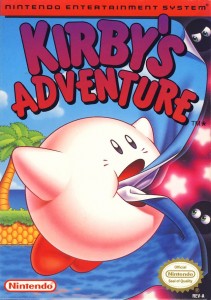 I wish Kirby was as popular as Hello Kitty. I’d totally rock a Kirby toaster.

It’s really hard to hate on Kirby. His puffy pink design (complete with puffy phalanges!) and ability to copy enemies’ abilities gives him a cute, bad-ass appeal. His later games, like Kirby’s Mass Attack or Kirby’s Epic Yarn, have really expanded on the concept of what Kirby as a character is capable of, but earlier games such as Kirby’s Adventure were all about simple platforming. Kirby’s Adventure was indeed His Royal Puff-ness’ one and only NES game, and while the game can be breezed through in an hour or less, it’s still a satisfying, technicolor adventure.
If you’ve never played a Kirby game, Kirby’s Adventure is the place to start. The original Game Boy games are fun, but the NES opened up the drab gray and green landscape that was Kirby’s Dreamland and turned it into a colorful paradise. Kirby’s pink-ness in particular bursts off the screen, while the tropical palette of orange, greens, and blues complement Kirby’s upbeat personality. Kirby’s ability to suck up enemies and gain their powers also makes its debut here. Powers include beams of light, fireballs, parasols, and the ability to turn into a wheel and decimate everything. The latter is a special boss power. PRO-TIP: always suck up the bosses after you’ve defeated them to gain their rich, tasty courage/powers. There are eight worlds and four stages on each world, along with some fun bonus games, like a crane game (pick up the largest Kirby for extra lives!). Despite the thirty-two levels, the game goes by rather quickly. Normally, I would view short length as deterrent to a game’s enjoyment, but, to me, the length feels just right. Kirby games never outlast their welcome.
As I was playing (quickly) through Kirby’s Adventure last night, I wondered if I would give this game a good score, simply because it was a Kirby game. After all, a strong argument can be made against the game’s lack of difficulty and brevity. I will say this: I don’t enjoy Kirby’s Adventure as much as I used to, but what does that mean? I don’t enjoy “Aladdin” as much as I did when I was seven years old, but that doesn’t mean it’s not a great Disney movie. Both “Aladdin” and Kirby’s Adventure are well-crafted, enjoyable examples of art made for kids that adults can also enjoy. Who can argue with that?
A
The following two tabs change content below.