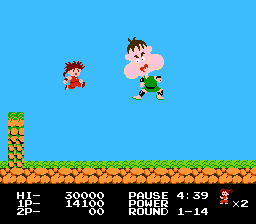 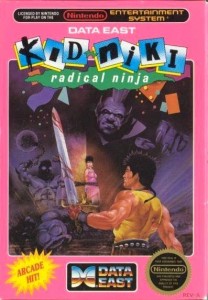 Kid Niki, in no way, resembles this mullet-driven beefcake. A pox on this cover!

“Atta Boy!” are the two words that appear on the top of the screen after Kid Niki successfully destroys a boss. To see such encouraging words of adulation in any game is stunning, let alone in a “primitive” NES game. Too often games are quick to deride, but not build up the player in their quest. Some would say this derision builds up anger in the player, making him/her want to defeat the game that dares to challenge his worth as a gamer. But I digress. Kid Niki is cute, fun and emboldens you to be the most radical ninja of them all.
Kid Niki is your typical early NES platformer, with each stage consisting of running forward, hitting guys with your weapon, jumping from platform to platform and little else. I know I’ve often stated that simple level design can be a bad thing in games. Kid Niki‘s levels, rudimentary run-throughs though they may be, inject inspired Japanese craziness at every turn. Whereas Kid Niki is the one, the only radical ninja, your adorable ninja brethren – clad in blue, orange, pink, and other sherbet- inspired colors – will stop at nothing to take you down. The bosses range from crazy big-headed sumo men to creepy flying kabuki mistresses that multiply when you hit them. For me, creativity in the design of a game’s denizens (and let’s not forget good controls) can go a long way in elevating the overall appeal of the game. Perhaps Kid Niki could have been a touch more difficult or included a wider variety of gameplay, but I’m content with what the game decided to bestow.
B
The following two tabs change content below.